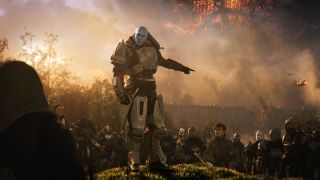 As Destiny 2 approaches, Bungie, and director Luke Smith in particular, have been very open about the development of the first game. Now, after the first game's less than clear narrative Smith is touting "a story" as one of the sequel's biggest changes.

When I met Smith recently, I asked him what, in his mind, was the biggest core change in Destiny 2? "I think broadly speaking it's probably the inclusion of a story," was his reply. "It’s actually focusing on having a followable narrative, and having a big sort of storyline, epic scenario. Layering the story content in a way we haven’t done yet for Destiny."

That layering means that while there's one main story in Destiny 2 - the Red War - it's not the only one. "So that main campaign, that’s what the trailers are about," explains Smith. "Then, below that in the layering, you have adventures that are stories about the worlds, the planets and the particular enemies contained therein - it doesn’t directly relate to the Red War, it tells a different story."

Smith hopes the extra focus on story will attract new fans on release. "I think one of the things for bringing new people into Destiny is going to be the way we’ve approached narrative differently, in terms of trying to tell a cohesive campaign. I think in Taken King it’s certainly something myself and the team tried to bring in and improve. We’ve got the space in Destiny 2 to let that breath a little."

It's interesting to see such honest talk about Destiny, especially after playing though so much of its evolution. We've already heard Smith admit that no one at Bungie really knew what the Darkness was in Destiny, as well as talk about how the first game was just way too much work to progress though - an error they're hoping not to make again.

If you want to know everything then here's all our Destiny 2 info.