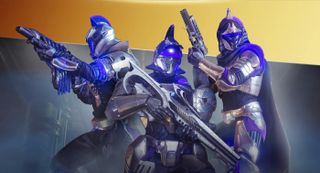 Bungie will make two highly requested changes to Destiny 2's Armor 2.0 gear system in the game's next season, beginning mid-March, as the studio explained in its latest This Week At Bungie blog post.

Firstly, players are finally getting the option to re-roll an armor piece's elemental affinity. "This is intended to mitigate the experience of getting an armor drop with a stat roll you want, but the wrong elemental affinity," Bungie explained.

This has been an issue since the launch of Armor 2.0 in Shadowkeep. At the time, Bungie said the introduction of elemental affinities was intended to give the team another way to balance armor and to give players another vector of customization, but the system quickly proved fiddly and limiting.

Beginning next season, which is said to be the Season of the Worthy, players will be able to change their armor's elemental affinity to any other element for just one Upgrade Module. However, "if your armor is already upgraded to a higher energy level, the cost will be the total upgrade materials necessary to reach that energy value plus one Upgrade Module." Bungie's wording here is a bit odd - as usual - but it sounds like you'll also need to upgrade your armor's energy level once to change its affinity, which would add a few Enhancement materials to the cost. That's still a bargain for the flexibility this change will offer.

This is a welcome change which goes way beyond build variety alone. Grinding the current seasonal gear sometimes feels like a waste of time since it won't be able to use next season's mods, and as we discussed earlier this year, that can lead an off-putting spiral that makes Destiny 2 feel pointless. This change may not fix everything about the game's seasonal model, but it's definitely a step in the right direction.