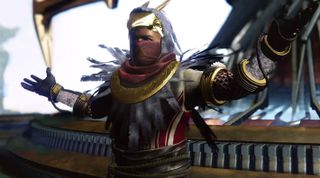 According to data-mined information from reputable miner Ginsor, Destiny 2's next season may be the Season of the Worthy, and it may see the return of the Trials of Osiris PvP event.

Ginsor shared a data-mined text entry on Twitter which reads: "[EDAC1366]: With the restoration of the Lighthouse complete, Trials of Osiris and more will return in Season of the Worthy." As always, data-mined info should not be treated as gospel, but a few other bits of evidence suggest that this entry is indeed related to next season.

For starters, the current season saw the return of Saint-14, and once he got to the Tower, we saw that his ship was done up in Trials of Osiris symbols - not symbols for Trials of the Nine, Destiny 2's long-defunct version of the PvP event. On top of that, Osiris himself is at the heart of the Season of Dawn, and since seasons directly flow into one another under the new evolving world model, it would make sense for Trials to follow his reappearance.

It's also curious that this information was discovered now. Data miners regularly uncover Destiny 2 details and events anywhere from four to eight weeks ahead of time, and with the next season now roughly six weeks away, it seems more likely that the Season of the Worthy will start on March 10 rather than in early June. To add to this, the only current Destiny Data Explorer entries related to future seasons, all of which read Season of [REDACTED], are tied to March 10 - specifically, March 10 to June 16. This suggests that the Season of the Worthy is beginning to bleed into the information accessible to data miners and tools like DDE.

Additionally, Ginsor's entry cites "the restoration of the Lighthouse." This stood out as odd, because one of the triumphs for the Season of Dawn explicitly mentions donating Polarized Fractaline to some sort of "restoration effort," seemingly as part of the Empyrean Foundation event coming at the end of the season. This suggests that, like the way last season's Vex Offensive: Final Assault event led us into the Season of Dawn, the Empyrean Foundation will set up the Season of the Worthy by getting us to rebuild the Lighthouse using Polarized Fractaline. But again, that's just a theory based on unverified, data-mined information. Even so, it is a compelling theory, and it fits with Destiny 2's current roadmap. But for now, this is all nothing more than conjecture.

Here's how to get the Destiny 2 Bastion Exotic fusion rifle.