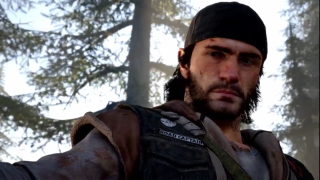 If you have room in your heart for another tragic tale in the post-apocalypse, Sony Bend Studios has a new game for you. The Syphon Filter developer revealed Days Gone at Sony's E3 press conference, teasing the tale of a lonely biker turned bounty hunter and mercenary.

Update: Sony followed up the reveal trailer with a few minutes of gameplay footage, starting off with our, er, "hero" pursuing a bounty on a dirt bike. Creeping along and lifting an engine part to use as a suppressor, he eventually finds the target - just as he's fighting off the first of a massive horde of zombies.

The chase continues, but it quickly turns into a case of survival rather than mercenary work. The biker retreats while cutting down swathes of zombies but more keep coming - and it doesn't look too hopeful at the end. Hopefully it goes better when you're playing it yourself.

Check out every announcement and full summary details on our Sony press conference page.