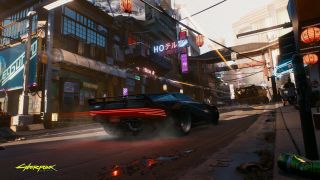 Cyberpunk 2077 Street Stories will fill out life in Night City with dozens of smaller narratives to encounter. The first-person RPG from CD Projekt Red will have a spectrum of different mission types, and it sounds like Street Stories will have a different feel to campaign missions: smaller and less cinematic, but perhaps all the more important for making you feel like Night City is a living place and that you're a part of its community.

A new OnMSFT interview with Cyberpunk 2077 producer John Mamais explained more about how CD Projekt Red is approaching the game's open world. As opposed to The Witcher 3, where work on the open-world parts of the game started late in development with fewer dedicated developers, Mamais said Cyberpunk 2077 places more of a focus on encountering interesting events and stories out in the world.

"The Street Stories are like little quests. There’s story but there’s not, like, advanced cinematic storytelling sequences so much. They’re a way to explore the world and level up your character."

Mamais said Street Stories can use certain templates, but "each one is customized to make them feel unique" and that the world is going to be filled with them. With roughly 75 to encounter, that sounds about right.

I've been playing a lot of Yakuza recently, so Street Stories immediately reminded me of that series' (in)famous Side Stories. If any of them get half as silly as Yakuza's Side Stories, which typically begin with being flagged down by a rando on the street and end with infiltrating two-bit cults and escorting kung fu grannies around Tokyo, I will be very happy.

Make sure your year is all plotted out with our guide to the upcoming games of 2020 and beyond.