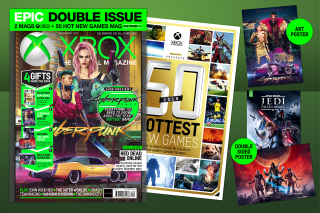 Cyberpunk 2077! We have all the latest info and gameplay details on the year’s most wanted Xbox game. In our massive preview we speak to developers CD Projekt Red and original RPG creator Mike Pondsmith, reveal some of the game’s characters, locations and more! As Red Dead Online goes from strength to strength we talk to Rockstar North co-studio head Rob Nelson about creating the online Western experience and what to expect next from the game. Plus we round up the Best Couch Co-op Games on Xbox, and bring you all the information on the best games, streaming, hardware and more that you need to maximise your Xbox experience. And there's a bonus magazine too - the 50 Hottest New Xbox Games, and awesome Cyberpunk, Star Wars and Elder Scrolls posters too - all free with the latest OXM.

The big hit of this year's E3 was undoubtedly CD Projekt Red's Cyberpunk 2077, thanks to the appearance in the game of one Keanu Reeves... it's going to be a sprawling and hugely immersive RPG set in a sci-fi cyberpunk future, and we can't wait. In the meantime though we bring you everything we know about the game, from gameplay impressions to developer insights, character and plot reveals and more!

We love our Xboxes, and all the great games that have ever been on it! Find out the story behind original Xbox game Divinity 2: Ego Draconis in this month's OXM.

We have an awesome interview with Rockstar North co-studio head Rob Nelson, who talks about the development and future of the company's online multiplayer RPG, Red Dead Online!

Tempted by an Xbox One X? We'll be searching for the best bargain Xbox bundle in our round-up of the Amazon Prime Day game deals