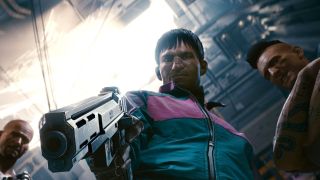 Cyberpunk 2077 isn't even out yet, but it's already seeing parodies and knockoffs. As PC Gamer reports, one such parody, the self-described "joke game" Cyberprank 2069, was recently pulled from Steam. It was originally titled Cyberpunk 2069 but was renamed within the past month, presumably because its name landed the game in some hot water.

Apparently that water wasn't hot enough for its developer, Cyberpath, because the studio recently claimed that people who purchased Cyberprank 2069 before July 22 would "receive your copy of Cyberpunk 2077 as a Christmas present," and that the owner who left "the funniest review will win [a] collector's edition."

Now, I'm not a lawyer, but even I know you shouldn't, uh, flagrantly offer copies of another game in exchange for reviews of your game, especially when that other game is the one you're parodying. It goes without saying that nobody who purchased Cyberprank 2069 - a $10 game - is likely to receive a copy of Cyberpunk 2077 this Christmas. And if you're somehow unconvinced that this game was blatantly cribbing from CD Projekt Red's upcoming RPG, have a look at its updated Steam store description:

Its Steam database page is a goldmine, honestly. Before it was removed from the store, its tags included Memes, Dating Sim, and my personal favorite, Masterpiece. Coincidentally, it was also assigned the Steam category "Low Confidence Metric," which is just *chef kiss*.

That dating sim tag reminds me: Cyberpunk 2077 romance options will reportedly be even deeper than The Witcher 3's.