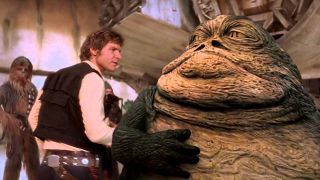 Writer Gabriel Garcia Marquez had a good rule for creating masterpieces like Of Love and Other Demons and 100 Years of Solitude: don’t ever look back on a work you’ve declared finished or you’ll go insane. The idea, according to Marquez, is that no creative work is ever truly finished, you just stop working on it and hand it over to the audience. After that, it doesn’t belong to the artist anymore, but the world at large. Returning to it, trying to take it back, is a recipe for disaster. That hasn’t stopped filmmakers from trying, though, and sometimes it actually works out.

Ridley Scott spent 25 years touching up and re-editing Blade Runner, releasing three versions to perfect his vision. Other times, though, it results in Star Wars: Episode 4 - A New Hope, the movie released 22 years ago that’s still colloquially known as the Star Wars Special Edition. Here is a prime example of what Marquez was warning against, a warped rendition of the ‘70s classic whose alterations range from itchingly invasive to bafflingly antithetical. As ill-advised as its changes are, though, the Star Wars Special Edition wasn’t doomed to failure. It could have worked.

Make no mistake: none of the changes made to the 1997 version of Star Wars could be called “good.” Even the least offensive added effects are distracting. The newly computer animated X-Wing fighters rounding Yavin on their route to the Death Star, the garish ring that explodes out from the Empire’s space station when it blows up, and the added shots of a digital Millennium Falcon taking off from Mos Eisley all clash with remaining shots of the models and effects that appeared in previous versions. Other digital additions clutter up otherwise excellent establishing shots. Luke’s hovering landspeeder entering Mos Eisley looked shaky on screen in 1977--R2-D2 looks like he’s about to fall off the back of the damn thing--but rather than just touch up a rough effect, the appropriate barren spaceport is littered with bumbling CG droids, rodents, and lumbering giant beasts of burden called Rontos that obscure the set.

When one of your movie’s greatest strengths is its sparse and iconic scenery, pouring on flourishes like these is a guaranteed way to muddy the whole work. Where the Special Edition went wrong was in adding to existing scenes rather than just working to improve them. Digitally altering vehicles especially was a good idea for the original movie, and in fact those sorts of changes had already been made to the movie to its benefit before the Special Edition. TIE Fighters, X-Wings, and other ships in the original movie are surrounded by visible matte boxes, a natural result of the filming technique used to shoot them, but Lucasfilm worked hard to remove them as much as possible. The 1981 theatrical re-release of Star Wars, the first time it appeared with the title A New Hope, removed a matte line visible in the first Star Destroyer scene, enhancing the reality of the moment dramatically.

Cleaning up the haze beneath the Landspeeder, removing matte boxes from Imperial fighters; these sorts of supplemental changes to the Special Edition could have helped keep the film timeless for new viewers. By adding in chunky new computer animated elements that don’t blend with the original camera tricks and model work, the Special Edition became almost more dated than the 1977 version within a few years, hence why those scenes were touched up yet again in DVD and Blu-ray versions in 2004 and 2009.

These aren’t the changes that people single out as the most troubling in the Special Edition though. Han Solo’s infamous first shot (which was changed in the Special Edition so Greedo shot first making Han more of a 'nice guy') is typically the addition that people use as evidence that George Lucas has become some kind of madman who has to be stopped. Even that scene isn’t conceptually bankrupt, though. Agreed, Han Solo shot first. Certainly. We’re all on board with that; it’s a scene that proves his pirate credentials, that his cocksure attitude in that negotiation with Obi-Wan Kenobi is backed up by a cutthroat survival instinct. Having Greedo pop off a shot and digitally altering Han so his head jerks to the side like some kind of reject Pez dispenser is a terrible idea. Digitally cleaning up the actual shot so Greedo’s demise isn’t obscured by smoke on screen could have worked out okay, though! Even letting the Rodian bounty hunter squeeze off a shot that misses an unflinching Solo would have worked.

But Han and Greedo shooting each other isn’t the problem scene in Special Edition. It’s the meeting with Jabba the Hutt. Before you roll your eyes and run from yet another take down of the lamentable all CG character in 1997, even the weirdo Play-Doh monster Jabba isn’t the problem with this sequence. The addition of Jabba the Hutt in the Special Edition is the essential example of why it’s often a good idea not to return to a finished creative work. Even more so than the Han scene, Jabba’s bantering with Han Solo directly contradicts the established Star Wars universe in the finished original trilogy.

Given it was in fact supposed to be in the original. When Declan Mullholland played Jabba as a sort of space Long John Silver, this portly fur-wearing cad who seemed harmless but could still have you killed, it was smart to cut him from the 1977 movie. The scene slowed down the action and didn’t add anything to Han’s stakes in the story that wasn’t already established by his dialogue with Greedo. Jabba the Hutt was extra fat. But even recasting the scene with a Jabba that looked more like grotesque six-man puppet from Return of the Jedi as a bonus scene in a re-release that wasn’t edited back into the story wouldn’t have worked.

Every new Star Wars movie coming until 2021 and beyond

The Jabba the Hutt created for the old Star Wars ceased to exist the moment the Return of the Jedi Jabba appeared on screen. They’re different people entirely. The Jabba of Jedi is a murderous alien with a ferocious temper; not someone to be crossed under any circumstances without the power to back it up. The Jabba in A New Hope is threatening, but he’s a goof that can still be swindled. Adding him back into the movie wasn’t just ugly and distracting; it made the larger story not make sense.

Which is the risk inherent in going back to a finished work. Star Wars, as it was in 1977, was a remarkable collaboration between lovable actors, remarkably gifted and ambitious effects specialists, a director and writer with a hell of a vision, and Marcia Lucas, the film editor that made the movie into the story that’s endured for 40 years. Going back to it could have resulted in a work that elevated the achievements of Marcia Lucas and those other creators. Instead, going back to it resulted in a flawed work that perhaps didn’t drive its creator insane, but certainly its audience.

For more Force-tastic goodness, check out what we think are the best Star Wars movies from A New Hope to Solo.