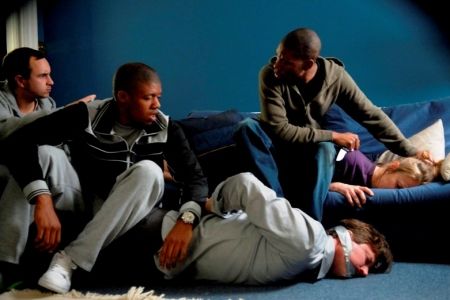 Cherry Tree Lane review - With his hard-hitting debut London To Brighton and its broader follow-up The Cottage, British writer/director Paul Andrew Williams showed he was as adept at gritty social realism as he was at gory comedy.

It’s hardly surprising, then, that his third movie has elements of both – a gruelling suspenser told in real time, flecked with a darkly comic sensibility and a smattering of class-war critique.

True, this tale of a middle-class couple victimised in a brutal home invasion goes where many have gone before. The obvious comparison is Michael Haneke’s Funny Games – both original and remake – though A Clockwork Orange and Straw Dogs also spring to mind.

There’s also a whiff of exploitation in the way we’re invited to watch Christine (Rachael Blake) and Mike (Tom Butcher) be abused by a trio of hoodies who use a supposed betrayal by their son as an excuse to beat dad, rape mum and steal biscuits.

Yet this isn’t just an excuse for nihilistic nastiness. What Williams does is present a literal culture clash: a collision between one generation – complacent and oblivious to what goes on beyond their porch – and another with its own morality, slang and a disregard for consequence.

Cherry Tree Lane loses its way near the end, stumbling over implausible plot turns, unlikely behaviour and an abrupt resolution.

Yet for the most part this is gripping, chilling and scary: a cautionary fable that will have you double-checking locks, using the chain and thinking twice the next time you go to answer the door.