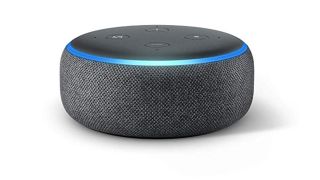 If you like Googling stuff, playing music and setting reminders but hate using your fingers then this Amazon Prime Day Echo Dot deal is for you. It's more than half price at just £22 saving you £28 (56%) in total. You can access your calendars, control Spotify and much more - all by using the power of your voice alone. Alexa works with a bunch of gaming TVs too, acting as voice control for your favourite TV shows etc, so it's something that could quickly become part of your entertainment life. And it's only £22 during the Amazon Prime Day game deals.

However, the money saving technological march to the future doesn't stop there. If you really want a smart smart home you can pick up an Amazon Echo Dot with a Smart Plug for £31.99, saving £42.99 in the process. Whatever you use with the plug can then be controlled by speaking to Alexa and asking it to turn the device on and off. You can even control it via a timer, or simply by whether you're home or not. Probably not a good idea for a fridge but great for lamps.

Amazon Echo Dot and Smart Plug | £31.99 (save £42.99)
With an Echo and a Smart Plug you'll be able to control a device in your home with the power of your mouth noise. View Deal

However, if you really want the peak of smart home tech (and for showing off to friends) you'll want this Amazon Echo Dot and Philips Hue White Starter Kit for £52, saving you £58 on the bundle. Set it up in your home and you'll be able to turn on and off lights by talking, setting timers, or simply by having Alexa detect you're home. It even works with some TVs to change the lighting as you play games or watch movies. Clever.

Amazon Echo Dot and Philips Hue White Starter Kit | £52 (save £58)
That's a saving of £58 for an Echo Dot, two bulbs and the Bridge to control them. It's perfect for getting you started in the world of smart lighting.View Deal

There are loads of other deals expected when Prime Day officially starts at midnight on July 15 (so, tonight), and runs until midnight on Tuesday.