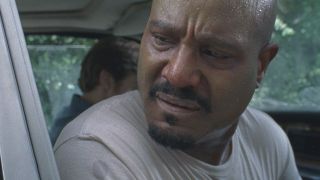 This was one of those The Walking Dead season 8 episodes. The kind that, unless you’re really invested in a handful of characters, chances are you’re not going to care all that much. This week’s episode 11 saw Gabriel battle against blindness, Negan concoct a new plan which sorta contradicts the entire series, and yet more people reacting to Carl’s death. Talking of reactions – here’s what the fine folk of the internet thought about it.

The eyes have it

Poor Gabriel. He’s had a rough run. If it’s not cowardly condemning others to death through inaction, it’s suffering from an unspecified illness and turning blind in the process. Heck, even his faith to God was tested this week. Real talk though, I actually liked all of the Gabriel scenes. It felt like old-school The Walking Dead in the best possible way.

Ok Gabriel crying in the back of that truck really got me feeling bad for him :(( #TheWalkingDead12 March 2018

If Father Gabriel goes blind, he should become the Daredevil of #TheWalkingDead #TWD12 March 2018

What is it with The Walking Dead and killing off doctors? I’ve barely had time to learn this guy’s name and off he shuffles from this mortal coil. RIP Dr *Googles* Carson 2016-2018. We hardly knew ye.

I swear on this show being a Doctor or having medical experience is a DEATH SENTENCE! So... Sorry Siddiq... You'll be next... #TheWalkingDead #TWD12 March 2018

And there goes the doctor... why do the writers have a fetish for killing off doctors/ helpful people? #TheWalkingDead12 March 2018

Yet more Carl-themed goodbyes this week. The writers chose to forgo sparing us the exposition dump of Daryl sharing the news with Carol, Maggie and company. Instead, it was Enid’s breakdown that told the whole story, and a fantastic job it was by actress Katelyn Nacon, too.

enid and maggie are always supporting each other. #TheWalkingDead pic.twitter.com/xiO5EVQhYH12 March 2018

Uhh… okay. Right. Let’s get this straight: Negan’s new ingenious plan is to coat everything with walker blood and guts so anyone getting hit with Lucille or shot with walker-covered bullets gets infected? Despite the fact that we’ve known from the very first episode that doesn’t work *and* Negan has done it himself with no ill effects. You do you, Walking Dead.

I need some clarification. I thought you couldn’t get infected by blood splatter. What is Negan talking about? Haven’t they used to old covered in walker guts to blend in plenty of times? This show makes no sense anymore! 🤦🏻‍♂️ #TheWalkingDead #TalkingDead12 March 2018

Come on! Negan can’t think touching blood/guts of the dead will infect people at Hillside! Duh! Haven’t Rick et al spread blood/guts on themselves to safely walk through the dead! Negan himself spread guts on himself to get out of trailer! HELLO #TheWalkingDead12 March 2018

Me? I’m not too upset with how the season has gone so far. The knee-jerk reaction of the internet, though, seems to be they can’t wait for it all to be over. It’s been shambling along for some time now – will the series take a bullet to the brain before long?

#TheWalkingDead , can you just end the series already? I'm only watching to see how it's ends at this point, as it hasn't been good for a few seasons now.12 March 2018

Sigh. #TheWalkingDead it is a struggle to watch these days. Love this show premise and the past stories, just not enjoying the direction it has been going this season. #sad #disappointed #twd12 March 2018

The only thing that hasn’t gotten boring on this show the last few seasons is the zombies. These are fantastic. #TheWalkingDead #SwampZombies12 March 2018

This episode is honestly a good one and feels like the old walking dead. #TheWalkingDead12 March 2018