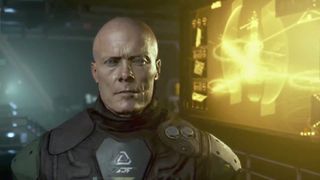 The leaked art has all but confirmed the name - Infinite Warfare - but now we have what may be out first confusing look at the next Call of Duty. The 30 second teaser has what appears to be a dead ringer for Mr Robocop, Peter Weller, addressing the camera with a stern message for an unseen enemy:

Here’s what he says:

"Make no mistake. We will rip you from the history books. Every last trace of you gone. You will know loss. We will be the architects of your pain. We will build monuments to your destruction. The whole world will bear witness to this: our ascension. We will blot out your skies. We will bury you in darkness. Know this and know us. We are your enemy. "

The last bit cuts off but it sounds like he says “We are the settlement defence fight...” There are also two slogans via the tweeted video and the YouTube version: "You cannot prevent what is coming" and "KNOW YOUR ENEMY".

However, the real interesting stuff is in the flickering frames in-between. First up there’s this shot of Nuk3town from Black Ops 3 which ends in an explosion. In the actual game right now a large ship has appeared overhead. Here's the shot from the teaser, just before the explosion:

There's also this “Nuk3town offline” message which, combined with the explosion in the teaser, suggests that ship destroyed it.

This skull face also appears repeatedly and seems very similar to the character Ghost’s skull facemask from the Modern Warfare series.  What's intesesting here is that Black Ops 3 is by Treyarch, and the Warfare games are by Infinity Ward, so there's some crossing of the streams between the two here.

This logo also appears, and can be seen on the Peter Weller-a-like character's uniform.

It's all a bit strange. On the one hand that image and mention of Nuk3town sounds a lot like a new multiplayer content but doing that so close to the rumoured reveal is weird - leaked retail details suggest a reveal early next week, and right now it's streaming the teaser on Twitch. It doesn't make sense to do anything DLC related so close to the new game and it's all a bit high budget for an add on. New posters and content have also appeared in the current Nuk3town maps  (again via CharlieIntel):