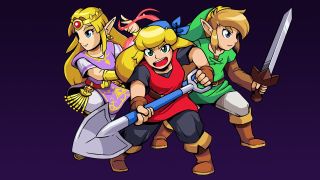 Cadence of Hyrule, the catchy fusion of the Zelda series and Crypt of the Necrodancer, has a holiday surprise for you. A new update adding the Octavo's Ode storyline just dropped into the game, giving everybody who owns Cadence of Hyrule a new way to play as they discover more about the villain who orchestrated (heehee) the latest nefarious takeover of Hyrule.

Developer Brace Yourself Games added on its Twitter page that this update will let you "find out what Octavo is really up to" in Cadence of Hyrule. I downloaded the latest update and booted up the game, but it looks like you might have to finish the main campaign before you can try out Octavo's Ode - I couldn't find a way to access it. I always meant to get back to Cadence of Hyrule after putting some time into it over the summer, and this should be the inspiration I need to start bopping moblins to the beat again.

Haven't tried it yet? Cadence of Hyrule is on sale in the US eShop right now for $17.49, down $7.50 from its standard price of $24.99, a deal made even sweeter by that free DLC. The game is fully titled Cadence of Hyrule: Crypt of the NecroDancer Featuring The Legend of Zelda, and it's a full-on crossover between the two series: the heroine of the first game, Cadence, finds herself trapped in the kingdom of Hyrule, and players take on the roles of Link and Zelda to help discover the strange magic behind this melding of the worlds.

You can play Cadence alone or in two player co-op, and if beat-matching isn't your thing, you can activate a turn-based mode that will restrict your enemies to only moving when you do. That said, you'll probably still be tempted to move, attack, and throw boomerangs to the beat of all the catchy Zelda remixes.

See what else has been on our mind for the last ten years or so with our ranking of the 100 best games of the decade.