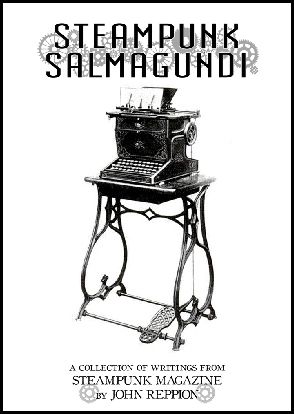 A collection of his columns for SteamPunk Magazine , it opens with “Urhwerk – the Incredible Steam Band”. This is a detailed, exuberant account of the curious partnership between an Irish dockworker and a German mechanical genius who contrived to change the future of orchestral music forever. Aided by a painfully-shy, but angelically-voiced, singer the two men ran up massive debts, hid for months in the vaults beneath their city and played stealthy busking shows on the streets under the name “The Russian Ghosts”. The group’s performances, using the back alleys to amplify the fragile but angelic voice of their singer for a distant audience, is one amazing image in an article filled with them. It’s an incredible story, building to an account of their final disastrous concert which is as absurd as it is horrifying.

It’s followed by “Doppler And The Madness Engine”. The longest piece in the book, this is a classic Victorian consulting detective tale. Doppler, whose gender is carefully never specified, and their assistant Grober find themselves caught up in strange events at a medium’s house. What starts out as a relatively simple case grows into something that takes in science, city wide anarchy and Doppler’s own mental problems. Told in a series of journal entries, this is the highlight of the book. Reppion keeps the pace hurtling along without compromising the language the setting calls for and each successive reveal is more unsettling than the last. There’s a sense by the end of the story of the future being a feral, dangerous thing that can be saddled but never quite controlled and that true greatness comes from the few people capable of that. Doppler is a captivating lead too, fragile and relentlessly strong by turns and I could stand to read more of their adventures.

“Baritsu, Bartitsu And The Ju-Jutsuffragettes” comes next. This is both a history of the most peculiarly British martial art in centuries and a look at how it, and the early spread of Jujitsu in England, assisted the suffragette movement. A suffragette trained in Jujitsu was more than capable of fending off a police officer and the “Ju-Jutsuffragettes” were a small group of the organisation trained to do just that. Here, the future is embodied not just by other cultures and their differing fighting styles but the different impacts that had on areas of British society. Bartitsu’s actually enjoyed a revival and if you’re interested, you can find out more here . It’s worth a look. After all, this is the martial art that saved Sherlock Holmes.

The book rounds off with “Séance Through Science – Edison’s Ghost Machine”, a shorter piece examining the long-standing story that Edison was working on a device to contact the dead. This idea, that both Edison and Marconi were experimenting with spirit telephones is one of those beautifully chilling concepts that steampunk horror has drawn on for years. However, as Reppion shows the story isn’t quite so clear cut. The article examines the story from every angle and finds something arguably more unusual at the heart of it, as well as providing a surprising insight into Edison’s personality. Packed with detail on Edison’s later life, including the chilling fact that his last breath was preserved, it’s a fun, elegantly written dissection of one of steampunk’s enduring myths.

Steampunk Salamagundi is a perfect title for this book. The eclectic contents include fiction and non-fiction all wrapped up in Reppion’s clear love of the genre. The steampunk future may have never got closer to us than the distant music of the Russian Ghosts but Reppion’s love for it is on every page of this book. If you’re ever looked at a good hat, a brass button or a pocket watch with even a little fondness, this is for you.