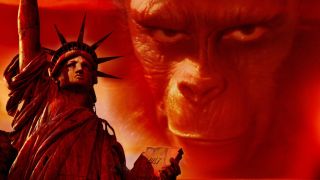 Spoilers ahead. Only fair to put that warning out there right away, because this is a spoiler spectacular, a celebration of the twists that have left us shocked, satisfied, and occasionally sobbing. We take it back to the old school with the original Planet of the Apes, revisit TV history with Lost, and enjoy more recent surprises like Star Wars: The Last Jedi.

I remember the first time I watched Planet of the Apes vividly. I was 13 when I sat down to watch it with my dad. Sure, it looked dated, and I thought the scene in the museum with the ‘stuffed’ human extras trying and failing to stay still in the background was hilarious. But I actually ended up getting so caught up in the story, and the ending, which you could even argue is the epitome of a good movie twist, absolutely caught me off guard. If you’ve ever watched the Simpsons you might have had this ending spoiled for you already by Troy McClure when he played Charlton Heston’s role in the musical rendition of the movie. The famous shot where Heston sees Lady Liberty on the beach is one of the most unforgettable endings. Who would have thought it was Earth all along! Ooh, help me Dr. Zaius! Heather Wald

The revelation that Rey's parents were nobodies is often cited in litanies of complaints about Star Wars: The Last Jedi, but it was one of my favorite moments of the new trilogy. We all agree that midichlorians are asinine right? It makes no sense that some people just have more of the stuff that surrounds and penetrates all living creatures than others. So why does Rey need that biological lineage? Why do her parents have to be secret Jedi that neatly tie her entire story back into the Skywalker Saga? The new trilogy already has its lead Skywalker, even if his last name's technically Solo. It's looking more and more likely that Star Wars 9 will retcon Rey's unremarkable parentage into a deceptive feint from Kylo Ren, but until then I'll keep enjoying Rian Johnson's theory-smashing twist. Connor Sheridan

You knew this was going to be on this list somewhere, didn't you? The rug pull to end all rug pulls, the third season of Lost features the show’s traditional flashbacks, detailing the lives of the passengers of flight 815 before they crashed on the island. Then everything turned on its head. The finale saw a bearded Jack off the island and, while we all thought it was a peek into a particularly rough time in the good doctor’s life (and, boy, has he had a few), it was eventually revealed to be a flash-forward. Jack tells Kate in the episode’s closing moments that they have to go back to the island. WHAAAAT? They escaped?! Now, we didn’t know what to trust – not even the show itself. Lost would eventually dip into that misdirection well once more in the final season, but never was it more impactful than right here. Bradley Russell

"You'll never see me coming," Ben Kingsley's Mandarin growled in that low, gravelly rumble. And you know what? He wasn't wrong. While the classic villain added a layer of menace to Iron Man 3's opening as a terrorist leader, stone-cold killer, and impassioned fanatic, he ended up being… well, none of those things. And the movie was all the better for it. Revealed as nothing more than a stoned, booze-addled actor called Trevor who's prone to streaking and upset bowels, the Mandarin's identity was a hilarious twist that shocked pretty much everyone. Phony or not, he was right; I don't think anyone did see that coming. Despite being a controversial move, this also ended up revitalizing the film and served as a reminder that the MCU was no longer following a safe, predictable path. Benjamin Abbott

This is the best twist for an entirely absurd (but hilarious) personal reason I call "The Atonement Effect AKA the reason why I want to know the endings to things in which I am personally invested." I read Atonement while on vacation and was rushing through it because I had brought too many books with me, so I skipped the Epilogue. The novel follows the lives of Robbie Turner and Cecilia Tallis during World War II. The two are lifelong friends (acquaintances really) before becoming (rather unexpected) lovers. However, Cecilia's jealous younger sister Briony spins a lie about Robbie that sends him to prison, effectively separating them. Years later he is released under the condition that he fights in the war. An older Briony visits Cecilia to apologize for her actions, but discovers Robbie is there on leave, and the two angrily remind her of the consequences of her lie.

A year or so later I watched the film, and just when I think it's over with Robbie and Cecilia telling Briony off, it fades to black before opening on a scene from present day, where an old woman sits in front of a television camera giving an interview. This old woman is Briony, and she explains that she wrote the novel Atonement to atone for her sins, as Robbie and Cecilia were never reunited. Robbie died of sepsis from wounds sustained during battle and Cecilia drowned in a tunnel after a bombing raid. I cried for 12 hours straight. Alyssa Mercante

I'm pretty sure this anime aired in English on Toonami, so I reckon it counts as TV. Even if it doesn't, I'm going to gush over it anyway, because The Promised Neverland has one of the best hooks I've seen in anything in years. It opens with some cute, happy orphans doing cute, happy things under the watch of their benevolent adoptive mom, but within 20 minutes it's established that these children are being raised as food for monstrous demons in a world gone mad - with their mom's knowledge and permission, no less. Their orphanage is a farm and they're treated as high-class cattle. It's like a horror remake of Peter Pan.

I realize this is Spoilers: The Article, but I don't want to spoil exactly how this is revealed - I just wanted to share the premise of this unexpectedly brutal story. I've shown it to three different people, and all of them binged it on the spot. This twist turns what looks like a cute slice-of-life show into a high-stakes, cat-and-mouse thriller, and it still occupies my thoughts after most of a year. Austin Wood

Most shows hold onto the reveal of their smartest twists until the season finale. This is Us drops it in the pilot. For the entire duration of the episode, we thought we had been watching the lives of four separate people soon to be bound together by the coincidence of their shared birthday, only to learn that three of them are in fact triplets, and the fourth is their father, and we've actually been swapping between two timelines (the 1980's and present day) without us even realizing, Westworld style. Better yet, creator Dan Fogelman (Crazy Stupid Love, Tangled) juggles clever structural framing with a beautifully earnest script, somehow managing to impress, surprise, and have us completely on board the This is Us train within 42 minutes. Alex Avard

I'm going to reveal unto you the hidden truth of the mortal realm: the only truly excellent television show in existence is NCIS. And no, I'm not talking about any of the spin-offs, I'm talking about NCIS proper. I could sit here all day talking about how freaking phenomenal this police procedural is, but I am here to talk to you about twists and oh man does this have some serious twists. One in particular though... it'll get you in the feels, an early-years shocker that has stuck with me since 2005. I'm talking about the death of Caitlin Todd. A wonderful performance from Sasha Alexander and a couple of great story arcs helps establish Kate the true star of the show – "safe" from harm, as it were.

In the Season 2 finale, everything changes. Kate finds herself caught up in a rooftop shootout alongside the rest of the NCIS team against some would-be terrorists – if I'm being honest, that's basically a Tuesday for the NCIS team. Anyway, Kate is forced to leap in front of Gibbs to save him from a bullet to the back and… she survives; the vest caught the bullet and the world simultaneously breathes this deep sigh of relief. As the team begins to joke about the near miss, there's a crack and a snap – a bullet rips through her skull, blood-splatter splashes across Tony's face, and Gibbs recoils in horror. Kate's body hits the ground unceremoniously. I'm screaming at the television. I'm crying. It's this whole thing; I'll talk about it in therapy one day. That was the day that my lifelong love / hate relationship with the greatest TV show of all day was formed. Josh West

What question do you want the GamesRadar team to answer? Let us know on Twitter.