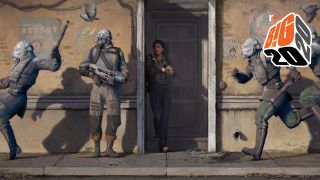 The master wall builders of City 17 couldn't have designed a more effective way to cut off players. To access Half-Life: Alyx you'll need a VR headset, minimum system requirements that trump the specs of most review PCs, and a living room large enough to swing a Combine soldier. These are barriers to entry so high that, like the Citadel, they recede into mist.

Yet it's irresistible. Already I'm devising sitcom-esque ways to get at it – a series of visits to an expensive VR centre in a different city, a long weekend at a friend's house in London. I'm one desperate step away from becoming Roy in IT Crowd, knowingly entering the house of a cannibal just to make use of his widescreen TV.

For a certain generation, a new Half-Life simply matters, no matter what form it takes. These are the devotees of the One Free Man who eagerly consumed the planned plot of Episode 3 when posted as fan fiction by former Valve writer Marc Laidlaw. To them, even a garbled blog starring Gertrude Fremont and Alex Vaunt is deemed an essential entry to the series. They'll be pleased to learn that, despite the intervening decade, many Half-Life: Alyx developers are veterans of the Half-Life episodes. Some even took that very first tram ride into Black Mesa as members of the original team.

"It's been fun to see how pervasive and deep the knowledge is among everyone about the world," says designer Greg Coomer. "It's often the newest employees who have the deepest understanding of Half-Life lore."

There are other gamers, of course, to whom the impossibly futuristic gravity gun must now seem positively antiquated, and to whom the idea of a shooter without iron sights sounds medieval. To them I speak now: you don't need to care about the cataclysmic quantum events of the '90s to love Half-Life today. Not least because VR has fundamentally changed its nature. Half-Life: Alyx is a new starting point, for all of us.

Valve has put together an entire campaign of equivalent length to Half-Life 2, but where that story took place over long stretches of coastline, its prequel will be far more compact. That's down to the impact VR has on exploration; pop on a headset and you'll likely find yourself less territorial and more drawn to the details. "Generally speaking, our playtesters have overwhelmingly wanted to take the time to examine what's on all sides of them," Coomer says. "They turn things over. They mostly don't want to race."

The breakneck movement speeds Half-Life inherited from id Software and Doom are ill-suited in a medium prone to inducing motion sickness. Valve has found instead that testers want to meander at the pace of real-world walking. That new tempo has encouraged the team to fill the once-sparse corners of City 17, saturating its world with dense interactivity.

You can see the results of this work in the trailer's defining moment, when Alyx scrabbles through the domestic debris of a hoarder's flat, grasping for ammo with which to fend off the encroaching Combine. It's a lived-in den of physics objects recognisable to players of Fallout or Dishonored, lent a new dimension by the very real hands tracked in VR space.

That tactility, the chance to pick up and prod, is more at home in 2020's gaming landscape than ever before. Truck and train simulation has become big business, as players have realised that a set of buttons and levers can connect you to a world in much more powerful fashion than a gun glued to the bottom of a camera. There's a mindfulness to a game like Half-Life: Alyx which, if not relaxing in the context of a Combine incursion, at least offers a reprieve from the outside world. It's an invitation to step into an uncanny sci-fi realm and be completely present.

"The physicality of weapon manipulations does change the whole FPS genre in a way we think is very positive," Coomer says. "We think players will be pleasantly surprised at just how much interactivity there is in the game."

It's a groundedness reflected in the fiction, which represents a reset of the City 17 story. This isn't about Gordon Freeman, or Gertrude Fremont, or whatever his name is. Half-Life: Alyx is less Half-Life 3 than it is Half-Life 0: an opportunity to shrug off a decade of disappointment, pick up those new-fangled controllers, and embrace Valve as single-player storytellers like we're meeting for the first time. Alyx Vance, is it? How do you do?