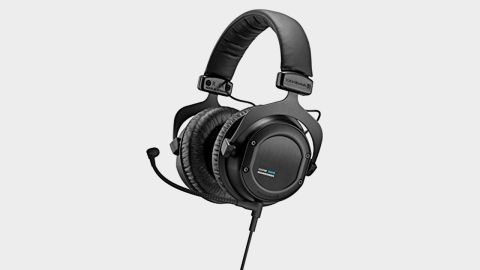 A well-built, if ugly, gaming headset with superb sound capabilities. It’s relatively expensive, but worth every penny if you’re serious about single player game audio.

Beyerdynamic is a big name in the music business, known for creating premium audio headphones to handle studio performance. So, how does its main player in the gaming sphere, the Custom Game, stack up (with such a weight of expectation behind it) against more traditional gaming headsets? The short answer is: extremely well. Unlike its more expensive cousin, the MMX300 - another Beyer headset that leans towards gaming - the Custom Game gets things right where it actually matters. Superb sound, sturdy build, sensible materials, and reliable features all add up to something that’ll definitely make our best PS4 headsets and best Xbox One headset lists. Here’s why.

While the Beyerdynamic Custom Game has many lovely features, the design isn’t one of them. It’s chunky and rather industrially designed, and probably isn’t something you’d wear outside the home (sorry, Switch owners). However, aesthetics are very much secondary to the build quality of the headset which is exceptional: there’s a solid, padded, and adjustable metal headband; two flexible frames where the earcups attach; comfy and soft faux leather around the ears; and a thick cable that plugs directly into the left cup. Overall, it sits nicely on your head, doesn’t pinch, and is very unlikely to fall off. It’s light enough to be comfy for hours of gaming too, which is a big plus. While the MMX300 had issues around the cable connection, the Custom Game appears free of any such concerns in our testing.

The mic has a neat little pop shield, and a flexible arm, and it feeds directly off the cabled connection to the earcups. There’s a switch for the headset’s various settings on the right earcup and… that’s about it. No flashy lighting, no garish logos, and the headset has a closed back for better noise cancelling, which also leaves the design pretty simple. It plugs into your console via a 3.5mm cable, and has a splitter if you need one for PC.

Not a huge number of features here. The mic obviously lets you chat, and it performs extremely well - clear, clean vocals to whoever is on your team in any given game, and the popguard helps minimise background noise. There’s a mode switch on the right earcup, which changes the sound profile outputted by the headset - essentially, the more ‘open’ the switch is, the heavier the bass. The rest of the settings are variations on this theme, and it’s handy to be able to switch up the sound depending on what game you’re playing (or if you’re just watching TV or listening to music).

This is where it really counts. The Custom Game performs extremely well across our regular suite of testing games - excelling in the likes of Resident Evil 2 Remake and Hotline Miami. When playing Resi you really notice the smaller noises used to create the bulk of the game’s sinister atmosphere, and although the Custom Game doesn’t output in true 7.1 surround, it does a decent enough job of creating an accurate soundscape. You know roughly where each zombie is, and how close they are to biting into your delicious flesh. Similarly, with Assassin’s Creed Odyssey, the headset really brings out the incidental audio details in the world, like the crackling of fires and humming of crickets wherever you are in ancient Greece.

Unlike most other headsets, the Custom Game also manages to perform well with a range of voices, and even on the more bassy settings you’ll still hear speech come through with a pleasing richness. Many gaming headsets are tuned to surround sound, and struggle to avoid making dialogue sound ‘empty’ but the Beyer doesn’t have a problem here. If there’s any downside to the performance here, it’s in the surround sound. While it performs well in Apex Legends and Ghost Recon Wildlands, it doesn’t quite offer the same imaging as specialist gaming headsets like the Turtle Beach Elite Pro 2 or the Razer Kraken TE. It’s by no means poor when it comes to picking out distant gunfire and not-so-distant footsteps, but it isn’t the best of the best either.

When tested with movies and TV shows the Custom Game adapts extremely well, bringing our sample of MCU films (Thor Ragnarok and CA: Civil War) to life and really pumping out the crunchy gunshots in John Wick 2. It’s fantastic with music too, adapting to all styles extremely well - metal and anything guitar-based a particular highlight. Then again, you’d expect this from a headset manufacturer with such musical pedigree.

The Beyerdynamic Custom Game comes at a high price - usually between $150 and $300, depending on whether you can find a bargain - and if you spend around the lower end of that price, it’s well worth the money. If you’re looking for a headset that performs better with online shooters, you can get better value from the Kraken TE, but in terms of single player gaming the Custom Game is tough to beat. It’s something you want on your head for a good, long session in Red Dead 2 or Assassin’s Creed Odyssey, or for any movie or TV show you play through your console. Heartily recommended.

If you're interested, here's how we test gaming headsets on GamesRadar.

A well-built, if ugly, gaming headset with superb sound capabilities. It’s relatively expensive, but worth every penny if you’re serious about single player game audio.