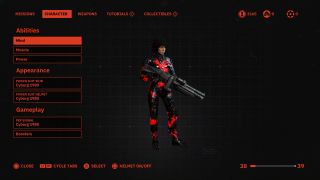 There are a whopping 44 abilities to choose from in Machinegames’ latest, which sees you taking up arms as the two daughters of BJ Blazkowics. But, if you want to liberate Nazi-occupied Paris you’re going to need to pick the best Wolfenstein: Youngblood abilities to suit your playstyle and complement your partner in battle. Read on as we list some of the best abilities in the game so you don’t waste your precious points and can access all of the best content that the game has to offer.

For versatility's sake, you want the adjacent option, either Crush or Cloak - the opposite of the one you picked up during the Wolfenstein: Youngblood starting choices screen. This will cost you a cool five ability points, which is hard to accumulate at the start, but it’s well worth being frugal and saving up as it’s a completely new ability that can warp gameplay, unlike the more statistical skills that litter the character screen. If you start out with Cloak it’s well worth grabbing Crush, as a lot of the game’s puzzles are gated behind doors that you can only run through with that power. It’s also just really great for downing nasty Nazis. Cloak is less important as the game makes it really difficult to actually play as a stealthy character - as much as you may try you’re almost always going to end up in a firefight or butt heads with your more aggressive partner.

There are collectibles everywhere in Wolfenstein: Youngblood. From UVK Covers to 3D Glasses, Floppy Disks and leftover notes, every combat arena is littered with things to pick up, each one netting you around 50 XP apiece. In the early game, I did my best to pick up so many of these items that I was ranking up in no time, but you can make the process even easier in the mid-game and gain so much reliable XP by sweeping the environment once you’ve cleared it. All you need is the Secrets Collector perk which lays out the location of every secret in a given map. It can make the mini-map difficult to read, but it’s worth it in the long run for the XP boost.

This is another one you should pick up early in the game to help you across the course of the narrative. It’s early in the tree and lets you do a quick dash in combat. It feels great to pull off and adds to your verticality. Both Jess and Soph can double jump, dash and slide along the floor to unpick enemies in combat and outwit them. They can also stomp after a double jump to crush Nazis. Combine all of these moves to get out of the way of lasers, exploding hounds and other villainous beings.

If you went for Crush at the start, this is a fairly essential pickup. It lets the player run into armour-clad enemies and knock them over instead of just normal organic soldiers. Given that this stops your opponent from shooting at you it affords you the opportunity to slow down the pace of battle, something that will become necessary once you start raiding the Brother towers and getting into the game’s more difficult firefights later on. It’s also incredibly useful if you need to make a quick escape from a battle that you’re losing.

If you picked up Cloak as your starting choice, the first few skills in the tree are more incremental upgrades, but Parking Cloak changes everything by making it so you don’t waste your ability when you’re stood still whilst cloaked. This actually makes stealth possible in the game if you’re keen on trying it, though as mentioned earlier, it’s so hard to actually commit to this playstyle when you’re playing with another person that it’s hard to justify. If you fall on the Dishonored side of the fence though, channel your inner Corvo and commit to lurking in the shadows. It might pay off!

If you’re more of a casual stealth user in Youngblood this is the ability for you - it's a good early pickup if you’re struggling and plan on fighting through on the higher difficulties. It lets you stealth skill super soldiers and armour-clad goons if you’re capable of sneaking around. This is for when you have the luxury of approaching a room with the element of surprise, which honestly isn't too often, but sometimes your enemies will turn their back to you, or you can use your sister to draw their fire whilst you go in for the kill. It’s early in the tree and you’ll definitely get some use out of it in the underground portions of the game where the lights go out.

Straightforward but undeniably essential, Dual-Wielder lets you wield two side-arms at once in Youngblood, which becomes an incredible boon if you upgrade either of your starting choices, the Maschinenpistole or the more deadly Pistole. Personally, I picked up the silencer and all of the fire rate upgrades for the Pistole so that I could dual-wield and do even more raw damage with the alternate burst fire. It gives a sidearm the efficiency of a rifle and given that the pistole deals great barrier damage to armour-clad enemies, you’d be a fool to skip this one as it's pretty inexpensive and increases your damage output.

Another straightforward upgrade that you should focus on early, Grenadier ups your grenade carrying capacity. Throwables in Wolfenstein: Youngblood are unbelievably powerful, and given that the game starts to equate difficulty with ‘throw as many big barrier enemies at you as possible’ you’re going to need those grenades for the sheer clusters of heavy enemies that start running at you. They work great on the Panzerhunds too, so go nuts and hammer that throwable button.

If you thought the grenades were powerful, just wait till you get a load of the Throwing Knives. A more stealthy option that gives way to merciless, reckless throwing in the midst of battle, throwing knives deal remarkable damage to organic enemies and if you follow the upgrade tree and pick up the 6 point Blade Belt skill, you’ll have six super deadly projectiles to throw (that you can instantly reclaim after use!) I found that I was taking out armour-clad enemies in a few hits, with organic Nazis dropping in two or even one hit. When you end up at the Brother towers and you need to reclaim keys from the Uber Commanders, Wolfenstein: Youngblood’s Throwing Knives make woefully short work of them, so don’t skip this ability.

This one really should be one of the first abilities to shoot for, regardless of the fact it's a good way into the tree. This skill lets you store broken off turrets and enemy weapons in your inventory, like the Uberhammer or laser guns that can quickly eviscerate robots and armoured beasts. Once upgraded these act as short-use special weapons for when you’re in a bind - they fire fast and do mega damage, s make sure you’ve got a few at the ready for when you have to face one of the gigantic robot sentinels or bosses in Wolfenstein: Youngblood.