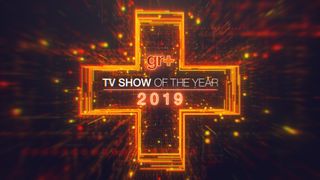 Another year, another batch of excellent TV shows reach the airwaves. While there were some arguably disappointing season finales, there were other mind-boggling one-season shows that left us baffled by their sheer brilliance. We are, as they say, living through a period of Peak TV, and the below 25 shows – the best shows of 2019 – show exactly why that's the case.

GamesRadar+ got together with the teams at Total Film and SFX to debate what would make the list. Everything – from animated adventures to the first-ever live-action Star Wars series – were viewed to be as diligent as possible. After some heated discussions, we came to the below conclusion. Enjoy!

What is it? Tommy Shelby struggles with being a Member of Parliament

Why you should watch it? Tommy Shelby's being part of the establishment would have sounded like an almost unachievable story arch when Peaky Blinders began. Yet, here we are, with the member of Birmingham's most notorious gang holding a place in Westminster. The latest season is perhaps the rawest to date, with the season finishing on a dramatic cliffhanger for Tommy, who has been suffering from insomnia. Watching him play political games is thrilling, though the sheer number of opponents and storylines presented through the six episodes can be frustratingly complicated.

24. I Think You Should Leave with Tim Robinson

What is it? Former SNL member does a surreal sketch show

Why you should watch it? Tim Robinson's mind is not like ours; it goes to extremely strange, weird, bizarre places – places that are outside the circle that's outside the box. Netflix allows the former Saturday Night Live cast member to run wild with I Think You Should Leave. The actor/writer explores normal scenarios that take deeply surreal turns; one sketch will see Robinson running an American game show with a weird red mascot called Chunky (guest-starring Andy Samberg), and the next will have him sitting next to an intensely odd man on an airplane who's squirming in his seat.  It's all very, very funny.

What is it? Celeste, Madeline, Jane, and Renata all try to move on with their lives following season one’s big death

Why you should watch it? There was rightly hoo-ha over the sidelining of director Andrea Arnold in the second season's editing process (HBO reportedly brought back season one helmer Jean-Marc Vallée and shunned Arnold), but it was still a joy to dig deeper into the secrets and lies of these beautiful people. As expected, Meryl Streep kills it as Perry's grieving mother on the search for his murderer, while Reese Witherspoon, Nicole Kidman, and Laura Dern are all exceedingly good returning players. While the ending may not have offered the catharsis some viewers wanted, the journey getting to that courtroom was thrilling.

What is it? Villanelle and Eve's cat-and-mouse game continues

Why you should watch it? The chemistry between MI6 agent Eve (Sandra Oh) and assassin Villanelle (Jodie Comer) through the first season was dangerously thrilling – and the main reason the show landed a spot our best shows of the decade list. While season two couldn’t reach the heady heights of the first, with the season finale falling a little flat, the ongoing battle of fists and wits between the two leads remain enthralling. Let's hope creator Phoebe Waller-Bridge can bring half as much lust and ingenuity to No Time To Die, AKA Bond 25, which she acted as a consultant on the script for.

What is it? The final season of HBO’s "tits and dragons" show (Ian McShane's words, not ours)

Why you should watch it? Yes, the final season of Game of Thrones felt a bit rushed given all that’s come before, and sure, the endgame carnage couldn't match the "Battle Of The Bastards". But this was, by any other standards, spectacular stuff. The battles were bombastic and marvels of TV making. HBO dug deep into its pockets to bring this together, and it shows. Well, maybe they could have done with putting some extra coin in the lighting and scripting budgets, but the first three episodes were certainly great. A shame that this ended with each episode basically amounting to having a different boss battle (from the Night King, into Cersei, into Daenerys). Still, this show has been a miracle of filmmaking, and we are thankful for the journey.