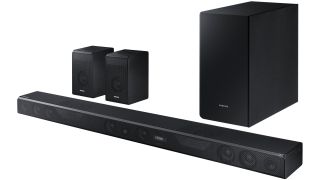 In a generation when games really do sound as good as they look, the importance of a high quality sound system is at an all time high for making sure your gaming experience is a sensory powerhouse in every regard. Some players use top of the range PS4 headsets or Xbox One headsets, which is an accessible and affordable alternative to prestigious home speakers, but a good surround sound system has the capacity to take your living room and transform it into a audio-visual playground of of virtual delights.

A good 5.1 setup will transform your gaming experience. Sound design in today’s triple-A games has never been so impeccably crafted – just look and listen to the likes of Star Wars Battlefront 2 or Resident Evil 7. To fully take your audio experience to the next level, and immerse yourself in all those headshots, explosions, and cowardly yelps, you need a surround sound system. Below, you’ll find a great range of 5.1 setups/sound bar hybrids to cater to a variety of budgets. Here are the best surround sound systems for gaming. Your ears are about to be very happy…

Note: Some of the systems below require a separate amplifier before they’ll output audio from your console. While it’s a bit of a drag having to spend yet more money, a decent amp will tangibly improve the audio experience you get not just from games, but from music and movies, too.

For US gamers, we suggest the Pioneer VSX-530-K 5.1 Channel AV Receiver. This great amp supports Dolby True HD and DTS-HD Master Audio, and is also future-proofed with the inclusion of 4K/60p pass-through.

If you’re in the UK, we recommend the extremely similar Pioneer VSX330 4K Home Cinema Receiver; a powerful 120 Watts amp that supports 4K video pass-through, 60p signals, and hi-res playback. Both amps have four HDMI inputs, making it a doddle to hook up multiple consoles.

Check Amazon
30 Amazon customer reviews
☆☆☆☆☆
Exciting, beautifully accurate surround sound
Audio is so rich it’s easy to pick out enemy players in shooters
The subwoofer can sound a little on the weedy side
The speakers are seriously thick. Best make sure they don’t block your TV

Your delicate little ears deserve the best. If you want to serve them up a sensory experience they’ll never forget, the Q Acoustics 3000 is the system your discerning lugs demand. Despite being almost two years old, this stellar surround sound package delivers an audio experience of remarkable fidelity. Plump for the full 5.1 setup, and the precision the 3000 is capable of mustering is nothing less than sensational. The crystal clear sound makes it easier than ever to pick out the oncoming footsteps of a rival player in a heated game of COD, while the crunching mid-range levels bring explosions to life with a super satisfying punch.

A few words of warning, though. Firstly, the 3000’s speakers are hefty customers – you’ll need a fair amount of space to properly accommodate them. Secondly, the subwoofer, while still capable of delivering reasonably deep bass response, sounds a little hollow at times. Oh, and you’ll also need a separate amp to plug your consoles into, driving up the already wallet-pummeling price even further. Still, Q Acoustics really has produced a superbly stylish set that can deliver the sort of sublime sounds your TV’s speakers could only have naughty dreams about.

Best for... Those looking for the richest, more satisfying surround sound on the market

Unless you’re in possession of a bank balance to rival Scrooge McDuck, chances are you don’t have endless wads of cash to throw at a new surround sound system. That’s part of what makes Yamaha’s clunkily named NS-SP1800BL so appealing: it’s a decidedly decent system that can be picked up for a reasonable price. Even more impressively, Yamaha hasn’t cut back on quality – it may be cheap, but this crisp sounding unit doesn’t skimp on delivering one hell of an aural experience.

The magnetically shielded speakers ensure you can game without fear of audio interference, while the surprisingly meaty subwoofer delivers a floor-shaking, deeply resonate bass. The satellite speakers also sport woofers and tweeters – we’re talking treble speakers, not irritable social media users – ensuring powerful mid-range response. Granted, the NS-SP1800BL want beat back potential suitors with its disappointedly plain looks, but then again, it’s a sound system, not a Italian sports cars. You’re meant to let it titillate your ears, not your eyes. In short, this system is ideal for gamers who want responsive surround sound and don’t want to abuse their current account to get it.

Best for... Budget-conscious audiophiles who want top notch surround sound for their console

Best known for gaming capture cards, AVerMedia isn't your first thought when it comes to a sound system but its GS333 is a pleasant surprise for those not wishing to break the bank yet still get serious sound for their buck. It's not going to win any style awards for its black bar but this definitely isn't an unattractive addition to the front of your TV set up and what it lacks in style, it more than makes up for in booming sound. With a specific gaming setting for extra clarity for explosions, footsteps and weaponry, the layered sound on offer here is impressive.

The included remote lets you flip through the various outputs easily but the only downside is that you'll have to remember the colour that matches up to your particular output of choice. You'll want yellow for optical out while bluetooth and other ports rely on different choices. The Soundblast also makes an ideal and exceptionally loud Bluetooth speaker so it's a brilliant multitasker too. The only major complaint we have with it is the fact that the minimum volume is still rather loud so if you're still trying for detailed sound after people have gone to bed, you'll have to switch back to the TV speakers. Loud is clearly the only way AVerMedia expected you to have it.

Best for… Great sound on a budget without wires trailing everywhere

Now, you may think including a sound bar in a list of best surround systems is a touch cheeky, but don’t walk us off the 5.1 plank just yet. Y’see, this particular sound bar actually comes with a pair of wireless surround speakers, and a separate subwoofer, immediately giving the HW-K950 a more rounded sound, while still taking up less space than a standard 5.1 system. Best of all, this future-looking unit supports Dolby Atmos, with the bar and speakers fitted with upward-firing drivers that bounce sound off your ceiling to create a listening experience that offers a genuine sense of verticality.

Though there aren’t that many Blu-rays (let alone games) out there that currently support Dolby Atmos, Samsung has wisely equipped the HW-K950 with what it calls an optional ‘Surround Sound Expansion Plus’ mode. Basically, it’s a feature that mimics true Atmos 5.1.4 sound even if the source material doesn’t support it. It gives this system a truly unique selling point, and the tangible sense of three dimensional depth to the HW-K950 is a game-changer. Having sounds beamed down to you from above is quite the thing in horror games. Pair this (admittedly expensive) unit with Resi 7 and your ears may never recover.

The form factor of the 510 really is its major selling point. It’s Hobbit-sized… without all that pesky foot hair. Each of its five satellite speakers measure just 94mm wide and 133mm tall, making them ideal to pair with that PS4 or Xbox One sitting in your bedroom. While it’s unfortunate this system requires a separate amp, the already low price tag of the 510 at least eases some of the strain on your change purse.

Though small, each speaker is fitted with a lone 75mm driver that can produce warm, full bodied sound. They’re certainly not the most precise speakers you’ll find – high-range detail tends to get clipped more than we’d like – but the 510 still produces a cracking surround sound experience for its price point. The included subwoofer is also pleasingly deep, though its resonant rumbles may make your neighbours hate you (more). Nevertheless, if you’re short on space but want to make your games come alive with 5.1 sound, the 510 is well worth considering.

£399
View at Amazon
£549.99
View at Amazon
See all prices (3 found)
62 Amazon customer reviews
☆☆☆☆☆
Super accurate audio delivers beautiful clarity when gaming
Having a second Blu-ray player in your home is a nice bonus
Bass levels won’t bowl anyone over
Navigating system menus feels like a weird throwback to PS3

Unlike every other system here, Sony’s BDV-N5200W comes with a 3D Blu-ray player. Now, you’re probably thinking ‘wait, my PS4/Xbox One already has one of those built-in’. Indeed they do, and good ones at that. Still, think about all those times you can’t quite be bothered taking your favourite game out of your console to pop in a Blu-ray disc. Wouldn’t it be lovely if you had a second player to eliminate this disgustingly First World problem? Of course, the fact the BDV-N5200W just so happens to be a terrific surround sound system in its own right should probably sway you more than its ability to play HD movies.

If there’s one thing Sony audio systems excel at, it’s delivering highly accurate sound, and the BDV-N5200W is no exception. Each channel in this 5.1 setup is immediately easy to pick out, and the sense of truly enveloping sound takes cinematic games like Uncharted 4 to another level. The only slight downsides? The wireless subwoofer could serve up punchier bass. Oh, and Blu-ray player’s menus are a pain to navigate – they basically copy PS3’s laggy XMB *shudder*. Sound-wise, though, the BDV-N5200W rocks.

Best for... Gamers who want quality surround sound… and an extra Blu-ray player for good measure.

Though it’s been primarily designed for use with a PC, Logitech’s Z906 actually makes for a great little surround sound system for the living room. It’s space-saving speakers output audio at both 20kHz and 35Hz, while its compact subwoofer belies its small stature by delivering superb, bone-rumbling bass response. The lack of HDMI inputs is a bummer, but the bundled central console at least lets you switch between audio modes from afar with the unit’s remote. Said modes include a pretty convincing 3D sound effect, further bolstering the Z906’s already room-filling audio.

The lack of support for formats like Dolby True HD stings a smidge, but the Z906 partially makes up for this omission with its THX 5.1 certification. George Lucas’ billionaire ears know good surround sound. Considering the budget price of the system, Logitech really has done quite the job with the unit’s build quality. The satellite speakers are particularly sturdy, in spite of their size. If you’re strapped for cash the Z906 delivers plenty of powerful audio bang for your buck – and if you’re on a super tight budget, the insanely cheap Z506 is worth considering, too.

Best For… Gamers looking to save money and space yet still want powerful surround sound.