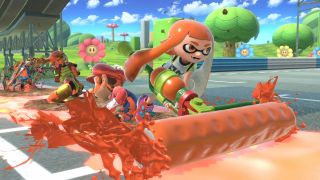 There are over 70 characters in Super Smash Bros. Ultimate and it can take a long time to master just one. Only eight are available from the get-go and it can feel like an eternity of battles before they're all unlocked.

While this isn’t a definitive list of the best characters to use, they are some of the most dominant and fun to play with. Balance patches and updates will change the game over time, but many of these fighters will still be a blast to play after Nintendo’s tweaks and fixes.

If you’re looking a fighter to master as you go along in your ultimate journey, look no further than the list below.

King K. Rool, of Donkey Kong Country infamy, is a new heavy, fantastically powerful character with all sorts of quirky moves. His crown can be used as a boomerang to do damage over a short distance and he can pull out a pirate gun that can shoot cannon balls and suck enemies in. His up, down, and side smashes can send enemies flying across the map early in the fight.

His recovery and speed are impressive as well although the best counter for the crocodile is a speedier fighter like Falco or Inkling kid. Rool is hard to launch and difficult to block, perfect for players who haven’t had a lot of time to test out Ultimate’s movement systems.

After disappearing from the action in Super Smash Bros. Wii U, Hideo Kojima’s mega popular creation is finally back on the battlefield in Ultimate. A lot has changed since his last appearance in Brawl, and while you may not see the worlds best players using him - he is a blast to play.

He’s got good, quick movements and a powerful dash attack. His explosives, while slow, feel incredible and can send smaller character flying at nearly any time in a fight. On top of all that, it’s just fun to beat up a colorful cast of cartoon-like characters with a gritty, war-torn veteran who’s wearing a skin tight cheetah-print suit.

The Inkling kids are one of the funnest additions to Ultimate since they fit into the style of the game incredibly well. It feels like they just finished a splatfest before heading across the street to trade punches in Smashville.

Every part of their arsenal is taken directly from their source material. Their recovery is a squid jump, they can smush enemies into the floor with the roller, and their splattershot is used in all sorts of attacks. It’s just a joy to pull out a paint brush and send enemies flying with a powerful side smash.

The cherry on the top is that their Splatoon-famous fashion is used as different skins for the fighter. One match you’ll be sporting a great skull bandana and the next a nice button down jellyfish top.

Pikachu is one of the original characters from the Super Smash Bros. 64 days, so why is it on this list? It’s because it rocks in Ultimate. It’s quicker, deadlier, and even cuter with it’s little luchador outfit.

While some of Pikachu moves have changed, it’s still got the powerful base from previous games. It’s even more annoying now then they have been in 64, Melee, Brawl, and Wii U.  Nintendo has made them even stronger this time around, maybe Let’s Go Pikachu’s success inspired them to give the critter a boost.

Simon’s one of the most interesting additions to Ultimate’s roster as Castlevania is a rough, dark, and violent series doesn’t seem like it would mesh well with Super Smash Bros. Luckily, that’s not the case. Simon, and his Echo Fighter Richter, feel right at home.

It also helps that he’s one of the top performers in the game. His whip has incredibly reach and power. It makes spacing and keeping enemies at a distance easier to handle. Richter’s not too different, but if you want a Castlevania classic then go with Simon.

Falco is one or the original bad boys of Smash. He’s consistently used by the best Super Smash Bros. Melee players in the world. Quick movements, an annoying laser gun, and awesome aerial abilities make him one of the most competent fighters in the game.

He keeps that level of power in Ultimate as well, his laser gun seems to cause more knockback and he can still deal a ton of damage in a short period of time.

The Street Fighter star makes his first appearance in Ultimate and he makes an impact - even though he’s an Echo Fighter for Ryu. He’s consistently better than Ryu in almost every way, his shoryuken is more versatile and he deals damage more quickly than his counterpart.

While he’s decisive on flat battlefields, be careful on stages with drop offs as Ken and Ryu’s recoveries are nothing short of terrible. Simply getting knocked off stage, even in a minor way, can be a death sentence.

Do you love Super Smash Bros. Ultimate? Then check out where it ranks in our best Nintendo Switch games list.