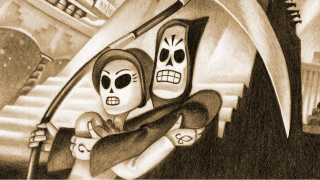 Point-and-click adventure games have long been the purview of personal computers, occasionally branching out to consoles but struggling to catch on in the same way as their genre forebears. But times change. While PC gaming has gone through an adventure game renaissance of late, so too has console gaming overflowed with rich tales that exist within the broad spectrum of the definition of the genre. From cursor-based, item-combining adventure purity to more directed interactive narratives, you can just as easily get your adventure gaming fix on your PS4 or Xbox One these days, along with all the classics you can find on old consoles if you know how to seek them out. These are the ten best console-based adventure games of all time.

The Sherlock Holmes series of adventure games by Frogwares is generally pretty solid, if a bit workmanlike in presentation and tone, but the best entry by far is Crimes and Punishments. It's presented as a series of small vignettes following the (other, capeless) World's Greatest Detective around London as he cracks a variety of cases - including a few based on actual short stories written by Arthur Conan Doyle. It features many of the same hallmarks of previous entries - find clues, investigate witnesses, and put everything together to finger the culprit - only this time, each case has multiple outcomes based on how you piece together clues on an in-game 'deduction board'. It's a clever game full of unexpected twists, and the anthology-style presentation assures that each case stays interesting long enough then concludes before wearing out its welcome. If you're a fan of good, pulpy detective stories, picking this one up is elementary.

2064: Read Only Memories may be heavily influenced by another entry on this list, but it only uses those influences as a starting point. Its chunky, 16-bit graphics and early '90s anime aesthetic are the appealing surface of a taut cyber-noir thriller soaked in synthesizers and saxophones. You play as a down-on-their-luck journalist who suddenly crosses paths with a sentient ROM droid named Turing. Together, you'll scour Neo-San Francisco looking for clues on the whereabouts of your friend, who just so happens to be Turing's creator. On top of all that, it's also a socially and politically aware critique on familiar concepts like transhumanism and capitalism, only here people are able to genetically modify themselves to look like animals. 2064: Read Only Memories may look retro, yet its ideas are anything but.

Until Dawn shouldn't be as good as it is. A bunch of 30-something actors try to pass off as asshole teens on a cabin trip in the mountains at the place where their friends died a year prior. It's a recipe for schlocky disaster, but there's something magical about Until Dawn's blend of light adventuring and campy horror. The first few hours go through all of the horror tropes - sexually frustrated kids snipe at each other, talk behind everyone else's back, fake each other out with jump scares - until about halfway through, when you suddenly realize how the game is subverting those tropes. First, you couldn't wait for them all to die; by the end, you're hoping for dear life that you can save them all. And you can - or, you can leave them to their fate. It's your call.

Playing Zack & Wiki is like tearing into a big bag of snack-size candy, minus all the extraneous wrapping. Each of its stages operate like mini-adventure game levels, where you're given a handful of tools and items - along with Wiki, your shapeshifting monkey pal - and a small set of puzzles to solve. Zack & Wiki's use of the Wii Remote is particularly novel, wringing every last drop out of the system's motion controls a year into its lifespan with sequences that require you to chop wood, turn keys, ring bells, and more. It's secretly one of adventure gaming's unsung classics, and one of the best games on the Wii (or the Wii U, thanks to the eShop).

6. Tales from the Borderlands

Borderlands is often funny in the way someone shouting internet memes into your face can be 'funny', but Tales from the Borderlands is actually, legitimately hilarious. It's also surprisingly heartfelt, charming, and suspenseful - all things you look for in a well-crafted storyline. There's constant tension between its two leads as they fight towards the same goals for different reasons. The 'unreliable narrator' framing will keep you guessing - and laughing - as it uses its flashbacks to pull the rug out from under you constantly. You will feel emotions for the series' hick mechanic Scooter; if you told me this before I finished the game, I would have laughed in your face. While it may lack some of the weight of The Walking Dead Season One, pound for pound, Tales from the Borderlands is Telltales' best work to date.

5. The Secret of Monkey Island

Humor isn't easy to pull off, especially in a video game, but The Secret of Monkey Island is still one of the funniest video games ever made. It's the story of a humble pirate-wannabe named Guybrush Threepwood as he roams Melee Island™ in search of respect and fortune (but mostly respect). Along the way he'll meet a rogue's gallery of characters, like Stan, the smarmy used boat salesman; Meathook, a man with two hooks where his hands should be; and Carla, who will train you in the art of insult sword fighting. Whether you play the original on Sega CD or pick up the Special Edition (now with voice acting and the ability to switch between classic and repainted visuals!), you'll learn the most valuable lesson of all: Never pay more than 20 bucks for a computer game.

I've never seen a game so thoroughly portray the existential loneliness of the American wilderness quite like Firewatch. As a temporary forest fire lookout, it's your job to sit up in a big tower during the warm summer months and… wait. Your only companion is the woman on the other end of your walkie-talkie, who assigns you daily tasks around your section of the forest. Strange stuff starts to happen, though you're not entirely sure how much of it is real and how much of it is from going increasingly stir-crazy over several weeks. Firewatch is a resonant, emotionally mature tale, equal parts Twin Peaks and Raymond Carver with a little Far Cry-esque exploration thrown in for good measure.

Grim Fandango overflows with a surfeit of imagination and ideas, yet somehow never feels incoherent. It draws inspiration from the Mexican Day of the Dead celebration, Aztec folklore, art deco, and 1940s film noir like Double Indemnity, combining them to tell the story of an underworld travel agent and his quest to find an innocent woman, whom he doomed to a four-year trek towards her final resting place. Grim Fandango is a lengthy game, with each of its sections representing one year of this perilous journey through the land of the dead, but it never feels padded, instead using its grand scope to fill its world with some of the most interesting characters you'll find in a LucasArts adventure.

Hideo Kojima's name may be synonymous with Metal Gear, but it's his second game that's perhaps his best. Snatcher is a cyberpunk visual novel/adventure game set in the distant future, on an artificial island off the coast of Japan called Neo Kobe City. Bioroids known colloquially as 'snatchers' are killing off its citizens and assuming their roles in society, and it's up to rookie detective Gillian Seed to unmask their leader and bring the bioroid menace to justice. It's a gripping thriller, filled with enough narrative and gameplay surprises to keep you on your toes throughout (make sure you save often!). On top of all that, it's filled with so many of the idiosyncratic Kojima-isms you'll see crop up throughout the rest of his career, and it's proof that Kojima knows how to write a damn good (and comprehensible) yarn when he's not just locked into Metal Gear mode. English Sega CD copies are difficult to track down, but if you're able to find one, it's absolutely worth it.

Shu Takumi's Phoenix Wright series may get all the glory, but it's Ghost Trick that is easily his finest work. You play as the recently deceased Sissel, who now exists in the world as a ghost and only has a few hours left to uncover the mystery behind his death. Ghost Trick quickly establishes the rules of paranormal possession: as a ghost, you can go back in time a handful of minutes, manipulate various objects and contraptions, and use those to change the fates of those around you. The adventure that unfolds is filled with some amazing characters (including Missile, the world's most adorably manic puppy), ingenious Rube Goldbergian puzzles, and one of the most satisfying twists in video game history. Don't miss it.