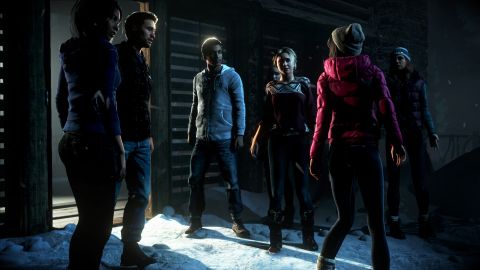 As cheesy horror goes, you've never had it this pretty or entertaining but when it comes to a one off experience, Until Dawn is expensive interactive terror.

Teen horror has a formula. A very simple formula of gory violence, schlocky dialogue, girls in lip gloss, boys in letterman jackets and plenty of grisly death. Scream clearly explained the rules, Tucker and Dale Vs Evil subverted them and, impeccably, The Cabin in the Woods broke them all. Until Dawn doesn’t want to break the rules in game form. It doesn’t have to. It knows they exist and it’s quite happy to introduce you to eight teenagers, pop them into the land of no cell phone reception up a snowy mountain and let you take it from there. And for the most part, that’s a bloody good thing. Pun totally intended.

Luckily for you I’m wrapped in the rusty chains of the abandoned anti-spoiler warehouse in the middle of nowhere so let’s talk about your attractive lambs to the slaughter first. On the one year anniversary of their friend’s mysterious disappearance, they’re all back in the same abandoned snow resort because that’s going to be absolutely fine. A somewhat unlikeable crew initially, the group is immediately saved by the casting of Heroes’ Hayden Panettiere as Sam. An instantly entertaining presence, she also adds a much needed sprinkling of Hollywood horror to proceedings - the Drew Barrymore of Scream if you will - and potentially manages to make her surrounding cast more attractive just by being there.

Until Dawn probably won’t be winning any awards for its writing any time soon but it’s got cheesy horror dialogue down to a T(een). Anyone else heard the word ‘douchenozzle’ said by someone who isn’t about to be ground up by a psychopath on the small-screen? No, didn’t think so. Choice starts out small when it comes to dialogue but even before the horror starts, Until Dawn has you making relationship decisions that gently affect the way you play the full game and the results are pleasing enough.

Just to keep that handy Indian burial ground trope alive and kicking, Native American ‘Totems’ are scattered throughout the game. These are little wooden fragments of Totem pole that when picked up show a tiny split second of the future. Separated into death, guidance, loss, danger and fortune, each one shows a (mostly deadly) version of the horror to come. You might not even play the right way to see them happen but recognise the situation and you might just have a split second advantage.

Your allegiances early on might not change who lives or dies - more on that in a bit - but it means you become surprisingly attached to most of the group faster than you think. Add in the incredibly effective mo-cap and gradual disintegration of the cast’s attractive looks as you progress and you might begin to feel more fondness for them with their ultra detailed skin still on their faces. Initially dislikeable Mike suddenly became a young Nathan Drake in my playthrough, exploring a horribly beautiful disused sanatorium armed with a pistol and every so often mirroring my exact responses of ‘oh sh*t’ as he came across something even more unpleasant.

Since its unveiling more than three years ago, Until Dawn’s main selling point has been choice. It was about time we made the stupid decisions in horror. Will you hide under the bed when the killer comes knocking or decide to run while the going’s good? From the start, it instantly feels like you have control of your new wards even if you are just hammering a QTE when the time is right. Like Heavy Rain before it, Until Dawn takes control during the big set pieces and requires some choice button pressing to survive. There’s no contortion of your thumbs here though, think Light Rain instead as you tap individual prompts or swipe across the touchpad to light matches or turn pages. Also, don’t touch the motion controls option at the start screen, they’re a left over from Until Dawn’s days as a Move game and that’s the kind of door we want to put a giant white cross on to indicate plague.

Walking is down to you and where some might see this as a chore, it mixes up the pace and gradually builds horror whether you want it to or not. This deliberate pacing works well with fixed camera angles and an unpredictable string-based score to leave you slightly on-edge the whole time. It’s something so perfectly understood by the third act that Until Dawn sometimes reaches the heights of the original Silent Hill games when it comes to building tension.

The game leans hard on the butterfly effect - one seemingly insignificant action influencing an event further down the line. A butterfly flaps in the corner of the screen when an important decision is made and some moments early in the game are made all the more tense for wondering what calamity you’ve unleashed further down the line. Choices are made with a flick of the right analogue stick and the game is at pains to remind you that doing nothing might be the right course of action. During a snowball fight early in the game, you’ve got the chance to throw one at a crow... but is that really what the object of your affections would like to see? Much like the tutorial that teaches you to keep the DualShock entirely still to feed a squirrel, both these mechanics are used to much darker and scarier advantage further in. Indeed, one of my most terrifying experiences of Until Dawn was during the finale. I was gripping my controller with white knuckles and trying not to pass out as I foolishly decided to hold my breath at the same time.

Yet you’ve seen the score at the top, you know I’m about to hit you with a very large ‘but’. To quote Jurassic Park ‘You never had control. That’s the illusion!’ and horribly, Until Dawn doesn’t hold the vast plethora of choices you might be expecting. To keep its narrative flowing over the eight hour run time, the game requires you to hit certain plot points: and these are unavoidable. One predictable second act reveal might just suggest that any decision you made in the first part of the game never really mattered when it comes to life or death. Even now I’ve removed some of the tension for you and for that I’m sorry because there’s plenty of that to go around. It’s only in the game's last few chapters where things get seriously risky for your main crew, and if you’re unlucky in some 50/50 choices you might just lose a favourite character… or six. Wonderfully too, these are crunchy, gory ends that you won’t easily forget, making you want to replay the final scenes just to see who you can send to meet their maker (spoiler, pretty much all of them).

But you want to hear about scares, terror and things that go bump in the night and while I refuse to tell you about content, what I will tell you is that Until Dawn is obsessed with horror films. You’ve probably read enough Metal Gear Solid reviews recently, so I’ll save you the pretension of mise-en-scene but this is a world slavishly inspired by the grim worlds of horror cinema. Every setting is unsettlingly packed with chains, hooks, over-turned wheelchairs and decay. You repeatedly walk through a cinema room, a giant nod and hearty wink from SuperMassiveGames that it talks your language. Even before we’re fully introduced to our teenagers, signs swing on Camp Crystal Lake style chains, My Bloody Valentine’s mine is waiting to be explored, a Sleepy Hollow bridge is traipsed through, and I Know What You Did Last Summer sits on the periphery like a watchful fisherman. Until Dawn’s grisliest moments would be nothing without Saw, Scream and Urban Legend.

So it’s with a heavy heart that I say I wish this was cheaper, I wish this was episodic and I wish I could send you all to go and play it immediately. As it stands, the experience is tremendously enjoyable but flawed, with less choice than we’ve been promised. There is plenty of horror here and it’s schlockily, predictably brilliant but this is inherently an ultra beautiful Telltale game. It’s a terrifying ghost train at times but by the end you might just be able to see the cogs working behind the scenes and as such the toughest choice you'll face in Until Dawn is whether or not to pay full price for it.

As cheesy horror goes, you've never had it this pretty or entertaining but when it comes to a one off experience, Until Dawn is expensive interactive terror.