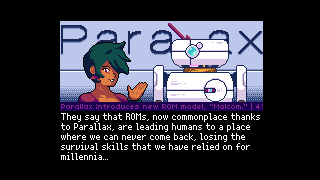 Good detective stories, Sega CD adventure games, anything that could be reasonably described as 'rad'.

For being nearly impossible to find, Hideo Kojima's cult sci-fi classic Snatcher has become highly influential over the past decade or so. Originally released on Japanese computers in 1988, Snatcher was updated and repackaged for the consoles of the era a few years later, taking advantage of the increased storage space of CDs by adding voice acting and hi-fi stereo music. It's a fantastic game, one that pushed the boundaries of storytelling of its era, using its visual novel framework to spin its gripping yarn and subvert player expectations.

Its status as $500 eBay curio hasn't stopped it from finding an audience inspired by its cyberpunk and late-'80s anime-fused vision of the future. 2064: Read Only Memories wears its influences right on its sleeve for everyone to see (heck, the image used on the PS4's drop-down summary menu is a direct riff on Japanese ads for Snatcher), but it's more than just a rehash - it stands on its own as a potent exploration of identity and class politics, wrapped up in a gripping mystery full of colorful and charming characters.

Pixelated graphics and dreamy synth jams fill out a cyberpunk detective story in Neo-San Francisco. Most LGBTQ issues have been ironed out by 2064, but humanity always seems to find new ways to discriminate. Now, the rift divides hybrids - those who have received surgery and genetic modifications to make them look more like animals - and the people who see these hybrids as an affront to humanity. Late capitalism has taken full grip on society here as well, as multinational corporations own multiple Californian cities, and effectively control everything from governance to the police force. People in San Francisco seem to have gotten off lucky, as society is generally peaceful despite these problems; the same can't be said for places like Los Angeles.

You'll navigate this oftentimes bleak view of the future as a nameless, down-on-their-luck journalist whose life is suddenly tossed into a whirlwind when an adorable robotic Relationship Organizational Manager (or ROM, as they're referred to by the people who own them) named Turing shows up on your doorstep. One of your old friends has been working on some experimental technology and has gone missing, and as his creation, Turing feels responsible for finding out what happened to him and bringing him home. Together, you'll hit the streets, interrogate people, hunt for clues, and discover the dark secrets lurking at the heart of Neo-SF.

The path you walk to find the truth behind your friend's disappearance is covered in blood and the misery of the oppressed, but it's not all dour. 2064: Read Only Memories is filled with color and life, its denizens attempting to find whatever humor and escape they can in this bleak, oppressive dystopia. You'll chat with bartenders who've found success amid chaos, meet a coffee shop owner obsessed with VR anime, gain the help of a master hacker born and raised in Raleigh, North Carolina, and so much more. The writing helps carry the story through, staying fresh and humorous even when it gets a bit long-winded (a trait expected of a game so lovingly inspired by a Kojima classic), and its characters are diverse and interesting, with some far more accommodating and welcoming than others. How you respond to these characters, and how you decide to solve 2064's puzzles, will mold and shape the outcome of its winding narrative.

If any of this sounds familiar, that's because 2064: Read Only Memories is actually a substantial update to a game released on PC back in 2015. Originally known only as Read Only Memories, the addition of the 2064 moniker brings with it a PS4 (and upcoming Vita) version, as well as some excellent voice work and a few additional and reworked puzzles. To push the Snatcher connection even further, think of it as the enhanced Sega CD version to its MSX2 original. It makes an already entertaining sci-fi adventure even better, giving its characters even more personality, and even throws in a bonus Christmas quest for good measure. Whether this is your first time through or you think you know Neo-SF like the back of your cybernetic hand, 2064: Read Only Memories has all the futuristic noir charm of Snatcher without the $500 price tag.

Also, how can you say no to a game with a smooth saxophone solo?