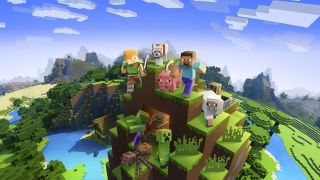 It doesn't take long before you start messing with Minecraft skins. Along with the best Minecraft texture packs Skins are a quick and easy way to change the game up and add variety to your black bashing exploits. Coming up we'll run through everything you need to know about Minecraft skins, from where to find them and how to use them. We've also got ten of our favourite skins to get you started covering everything from Star Wars to Game of Thrones. You're bound to find something that'll brighten up your world.

How do you apply Minecraft skins?

If you’ve not applied a Minecraft skin in a while, it might help to refresh your memory on the process. In the Windows 10 edition of the game, click the coathanger icon in the bottom right of the screen on the main menu. You will get a screen with your default Steve and Alex skins at the top. Avoid them and click on the blank skin to the right of Steve.

This is the (admittedly quite scary) custom skin default. On the right, below the words custom, you will then see the ‘Choose New Skin’ prompt. Click that and it will open up your downloads folder on your computer. Simply select the .PNG file that you’ve created or downloaded from your Minecraft skin site of choice and your skin should be ready to go once you click confirm.

Still reeling after watching Endgame? Step into the shoes of a mortal enemy by playing as Thanos. You might think wearing the skin of an eternal-deviant hybrid who can turn half of the population into ashes would take something away from the rags to riches story of Minecraft, but even The Mad Titan is vulnerable to a skeleton arrow to the head (*glares at Thor*) in this block-bound reality. You can even double down on the cosplay with the unlimited power of the Infinity Gauntlet mod. If you fancy playing for the other team, you can also pick up skins for actual Avengers like Ant-Man, but if you opt for that, just promise us you’ll stay clear of his butt...

With the final season of Thrones wrapping up, and no quality Westeros simulator in sight, you might fancy some Khaleesi cosplay. It could be quite cathartic actually, to head all the way through to ‘The End’ and take on the Ender Dragon as the mother of their species. Sadly, they won’t listen to your instructions, and you’ll have to get the arrows out. You could collect their dragon eggs, but you can’t raise or tame them. As always though, there is a mod for that,

The Hero of Time himself would make for a fine Minecraft skin for any budding adventurer looking to strike out alone in the wilderness. There are certainly some nasty beasts in the many dungeons underground and with Minecraft’s near limitless world, who knows what you will find! Just make sure to imbue your swords with magic at an enchanting table before you go all-in. If you wanted to make the experience feel a little more authentic like Breath of the Wild, there’s a mod for that too!

This little green Jedi warrior would be perfect for Minecraft players who want to set up shop in the swamp biome, munching on sugar cane and mushrooms. Make friends with the local slimes, set up shop in a swamp hut and await your padawan. Or, I guess, crash his X-Wing near your house. That seems to work too.

Minecraft has always been a toy-box of your own imagination, and there aren’t many characters better than Woody to help you lean into that aspect of the sandbox. This is perhaps best for players who fancy setting up a nice ranch, taming some sheep for their coloured dye and living humbly in the countryside away from the outlaw life. Just watch out for an army of lawmen who are out to do you dirty in front of your barn door. Wait… that was Red Dead...

Despite being a 2D cartoon character, Homer Simpson isn’t exactly a stranger to the world of 3D. Live out your dreams as a lazy nuclear power plant worker forced to fend for himself in a dangerous wilderness. If you find yourself to be a bit of a hermit, stuck crafting all day in your humble abode, this might well be the skin for you. There are no doughnuts in Minecraft, but, if you’ve been reading diligently so far, you should know that  of course there is a mod to fix that.

There are no ducks in Minecraft, only chickens, which is an absolute crying shame. Why don’t you fix that by playing as one of Disney’s most iconic characters? Squabble to your heart's content as you quack attack mobs in underground caves, seeking diamond reparations for this great crime against waterfowl. If you’re playing with friends, you could even push them to cosplay as Sora and Goofy and complete the Kingdom Hearts set. Now that’s a crossover.

As a brave explorer of ancient civilisations, Dr Jones would make a great skin for the spelunkers of Minecraft who enjoy getting into explosive capers down near the bedrock. As an archaeology professor, he would not. The problem is that crafting a diamond suit of armour out of the artefacts and resources you find in the ancient caves wouldn’t exactly fit with Indy’s code. That belongs in a museum, don’t you know!

For the Total War-loving history boffins and wannabe tyrannical leaders out there, here’s a skin for you. Napoleon once said that “if you want a thing done well, do it yourself,” and that captures some of the independent spirit that makes Minecraft so compelling almost ten years later. Of course, we don’t imagine players in a Napoleon skin would do well in a server with multiple players trying to protect their own lands. Eventually, someone will overstep their planning permission, in which case, you’ll have an army of skeletons ready to unleash on your foes. This tracks with another quote from the famed French statesman. “Never interrupt an enemy when he is making a mistake.”

Last but not least, for the hopeless explorers among us, you can respect the classics by playing as the endearing but idiotic protagonist of Monkey Island, Guybrush Threepwood. Whilst there are no pirate ships to commandeer or demonic siblings to deal with in Minecraft, you can get along just fine with your humble paddleboat and the random shipwrecks that can appear underwater, each with its own supply of loot. In other news, I’ve just realised that Disney owns the intellectual property rights to eight out of the ten characters I’ve touched upon in this list. Now there’s a scary thought for you to ponder whilst you pick.