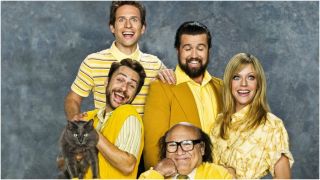 Over 14 years and 13 seasons, It’s Always Sunny in Philadelphia has cemented itself as one of the most daring, outlandish comedies of all time. Centred on four friends who hate each other (à la Seinfeld, but with more swearing), the show has expertly forced us to think critically about very real topics, all while crying-laughing at things we maybe shouldn’t. And, unlike other sitcoms, Sunny never forces us to like the terrible main gang. In fact, it’s probably better if we don’t root for them at all.

Despite some slightly dud seasons here and there, Sunny has, across its 144 episode run, released a solid number of episodes that rank among the god tier of comedy TV. While there are many (so many) to choose from, with the show coming back this autumn we've taken it upon ourselves to rank 15 of the best, most rewatchable episodes, with some honourable mentions for good measure. It’s by no means definitive, because who can really narrow it down with a show like this? Let us know in the comments which episodes you think should have made the cut.

In 'Frank Reynolds’ Little Beauties', Frank somehow finds himself involved in the child pageantry business and is desperate to prove he’s not a “diddler”. The gang unite to help him put on the show – naturally making it about them. The boys put together an inappropriate performance with a little boy, and Dee forces a little girl to sing a song about how much “Moms stink” to heal her own wounded childhood self-esteem. For all of that, though, it showcases the entire gang at their choreographed, selfish best.

It should have been a tough job keeping the quality high after an excellent season six. Somehow, though, the writing team pulled off the season seven landing seamlessly, with an episode that sees Frank desperate to marry a sex worker called Roxy. She tragically dies, which is a shame because she’s the best part of the episode, slurring her way through incredible phrases like “dick skin jacket”, thrusting money at snobby store workers, and surprising everyone with how besotted Frank can be. If only she could have stuck around and been a best friend to Dee.

Poor Dee – nobody seems to care about her at all. In a pretty astute commentary on the American healthcare system, Dee has a heart attack and the gang have to take jobs to pay for her hospital stay. They didn’t quite realise that healthcare was something that had to be paid for, but nonetheless, Charlie and Mac take an office job that ends in Charlie thinking he’s uncovered a great conspiracy – and goes on one of his rants about “Pepe Silvia”. The rest of the gang make it all about themselves, of course, with Dennis panicking that he’s also at risk.

In the midst of a basically perfect sixth season, “Mac’s Mom Burns Her House Down” shows that sometimes the best thing about Sunny isn’t just the main cast. After Mac’s mom burns her house down with a lit cigarette, she moves in with Charlie’s mom, in what they gang hope will be the Golden Girls. However, the women end up fighting, bonding over racism, and battling with Charlie’s mom’s blatant OCD. Mac and Charlie start to do things in threes to stop bad things happening, culminating in one of the most accurate on-screen portrayals of OCD of all time.

As the series goes on and the joke develops, it becomes clear that Dennis is, in fact, a sex offender. Between his tapes, 'The D.E.N.N.I.S. System' and “the implication”, Dennis becomes a vehicle for clever commentary on the insidious ways men can be abusive. That in part starts with 'Dennis Looks Like a Registered Sex Offender', in which Dennis has to deal with the ramifications of looking the spitting image of a recently released sex offender, while Mac tries to reconnect with his murderer dad.

Dennis and Dee are often best together, removed from the group, where their inflated self-worth can really set their lives on fire. In 'Dennis and Dee Go On Welfare', they quit their jobs at the bar to go on welfare, Dennis pretending that he’s a crack addict and Dee is his “r*tarded sister”. He has to prove that he is an addict, though, so they purchase some crack (“one crack rock please!”) and consequently lose days of their lives. Meanwhile, Charlie and Mac spend all of Frank’s money on strippers and limos, because none of them can really be left alone.

Sunny has always tackled big topics with comedy, sneaking serious talking points into conversation through a Trojan horse of offensive humour. That was often how Mac’s sexuality was handled – through homophobic jokes that revealed his own prejudices. In 'Mac Finds His Pride', Mac battles with where he fits in as a longtime self-hating gay man, and he tries on several personas before concluding with a big, beautifully choreographed, punchline-free dance routine. It’s maybe one of the least funny episodes of Sunny, but it has the most sincere pay off and hints at the very real themes under an ostensibly ridiculous surface.

The early episodes of Sunny are so deliciously offensive (and lo-fi) that it’s a wonder any more seasons were ordered at all. 'The Gang Finds a Dead Guy' is the first appearance of Dennis and Dee’s Nazi grandfather. After a man dies in the bar, Dee is inspired to visit her Pop-Pop, who reveals he’d like to be buried in his uniform. Charlie finds it, and becomes enamoured with it – when the gang burn the rest of Pop-Pop’s Nazi memorabilia, Charlie sits at home eating cereal in the hat he couldn’t quite let go of. Ever pushing the boundaries of likeability, though, Charlie is somehow still the lovable one.

Every gang needs nemeses to challenge them every now and again, and for the Paddy’s lot, their adversaries are The McPoyle family. The McPoyle’s are a milk-drinking, terrifying bunch who, in 'The Gang Gets Held Hostage', threaten our deplorable group with guns and force them to destroy their own bar. The gang panic about falling victim to Stockholm Syndrome and don’t realise that the McPoyles’ guns are rubber until it’s far, far too late – proving it doesn’t take much to outsmart this bunch.

'The Gang Goes to the Jersey Shore' sees the gang heading to the seaside to relive Dennis and Dee’s youth, but instead they end up getting injured, smoking angel dust, witnessing a murder, and almost being the victims of one. Naturally, this entire spiral happens while “Vacation” by The Go Gos plays. Mac and Frank have a little more luck eating rum ham and partying, while Charlie spends a night with the waitress before they all have to escape Jersey for good.

The gang don’t ever really do anything out of the goodness of their hearts, and in 'The Gang Gets Extreme: Home Makeover Edition', they decide to help a poor family renovate their house in an effort to get good karma so their vision boards come true. They break into a family’s home, effectively kidnapping them and destroying everything they own before giving them an uncanny “American” makeover, complete with blue contact lenses. It’s terrifying and ridiculous and escalates as only a good Sunny episode really can – and of course, they’re punished for their “good deed”.

Some of the cast of Sunny have backgrounds in theatre, which is frankly wasted on the majority of the non-musical storylines. Luckily, they rectified that with “The Nightman Cometh”, perhaps the most well known Sunny episode, and the most rewatchable. It sees Charlie writing and directing a musical to win the affections of The Waitress – and getting furious with the gang for not cooperating well enough. What’s more, the songs and choreography are actually pretty good (or, at least, they're worth repeating at home for months afterwards).

Danny DeVito, playing Dennis and Dee’s dad, initially seemed like a frankly ridiculous addition to a perfect, but mostly unknown, cast. However, he’s made it work: as disgusting, messy, terrible father Frank, DeVito has excelled himself. In 'The Gang Gives Frank an Intervention', he reaches new levels of disgusting, horrifying his family and forcing them to make him stop being so gross and hitting on family members (or drinking wine from a can). Of course, it all ends in screaming and guns being waved around, but they’re all united by it.

Some of the best episodes of It's Always Sunny take Mac and Charlie, lifelong best friends, away from the rest of the gang. In 'Mac and Charlie: White Trash', the gang have an all-out class war when it’s time to find a pool to cool down in. Dennis and Dee, naturally, try to get into the fancy pool, only to be turned away. Mac and Charlie attempt to renovate an abandoned pool. They get stuck and try to escape, all while escalating their idiocy by attempting backflips, bragging about their denim hot pants, and calling a delivery guy for help.

How about some absolute insanity and no-holds-barred cruelty? In 'Chardee MacDennis: The Game of Games', the gang battle each other over three rounds of their own devising: Level One (mind), Level Two (body) and Level Three (spirit), which may not sound that bad but it involves some “emotional battery”.

“Don’t try this at home” should be the tagline to the entire show, but someone has devised a version of this you can play in your living room. Viewer discretion advised.

In a show full of wonderfully unlikable idiots, Charlie stands out as being the easiest to actually like. In 'Charlie Kelly: King of the Rats', the gang get together (for once) to try and give Charlie the birthday he deserves. Some misunderstandings aside (“what is your spaghetti policy here?”) the gang bring Charlie’s “dream book” to life, denim chicken and all, to cheer him up. Somehow, it ends up being as close to heartwarming as Sunny could ever possibly get.