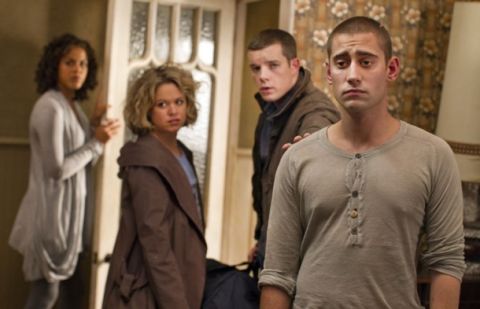 THE ONE WHERE Herrick really returns, the bodies pile up, Mitchell’s arrested and everything pretty much falls apart.

VERDICT Mitchell has finally completely unravelled and things can, surely, never be the same again. The tenacious brilliance of DS Reid (whose fateful “has anyone checked the attic?” has to take the prize for crunching gear change from euphoric joy at a job well done to terror in just a few moments), Herrick’s brooding presence lurking in the attic and Annie’s train wall (surely the ultimate guilt trip) meant that by the end everything falling apart feels depressingly inevitable, but even on that basis watching it happen is heart-wrenching stuff.

Annie starts off – depending on your view of her – as either naive or dim explaining away why Mitchell has the scrapbook, but her eventual realisation of the depths to which he’s sunk is beautifully played. Mitchell’s slide to the dark side stutters, but while he might pull back at the final moment, he’s perfectly happy to let Nancy be eaten by Herrick if that stops her looking into the case and brings Herrick back from his dementia. Aidan Turner performs miracles, keeping us rooting for a Mitchell almost unrecognisable from the one we first met – now willing to lie to himself and those he loves and do anything necessary to evade that wolf-shaped bullet.

From the Duran Duran montage onwards things start to get brutal, and the shocks come so thick and fast that as viewers we’re reeling as much as the characters. There are some outstanding performances: Lenora Crichlow proves that Annie’s moral compass is as vital a part of the show as her comic chops, while Robson Green once again does wonders with a few short scenes. But the enduring image of the episode is the terrified eyes of Nina, staring out from above Herrick’s fingers, as you see the thoughts flit across his face trying to decide whether to spare her because of her kindness. As ever Jason Watkins is chilling and the moment he stabs her – in the back no less – is gasp-out-loud shocking.

Suddenly the slightly fluffy comedy episode last week feels like a welcome respite – if we’d had no gap between the tension of episode five and this one, swathes of Being Human fans would need therapy. As it is, the last 15 minutes of this episode feels like an endurance test – with all those different plot strands finally tying together in a way leaves the bar set very high for the finalé. Although forget needing a cushion to hide behind, at this rate there will need to be a helpline number at the end of the show...

FLASHBACKTASTIC We go back 20 years and see how McNair and Herrick’s paths have crossed previously, complete with a suitably epic Herrick speech. It turns out even as a surveyor McNair was a bit of a scrapper – and Herrick’s penchant for outfits includes literally acting as ringmaster...

SOUNDTRACK HIGHLIGHTS Propellerheads’ “History Repeating Itself” with Shirley Bassey as Herrick gets his mojo back would be the best use of music through the entirety of the series if it wasn’t for that brilliant “Hungry Like The Wolf” montage, complete with a lovely visual gag about the relative size of George and Tom’s chickens.

LOOSE ENDS Is Nancy dead? Was that last gasp a death rattle?

POP CULTURE REFERENCE OF THE WEEK Hat tips for documentaries about children with elbows for faces and Jeremy Kyle. But the best one has to be George admitting he got his information about wolf pregnancies on Wikipedia.

BEST LINE: Any other week, Annie would have had it for her gut wrenching speech to Mitchell on realising his role in the Box Tunnel murders - “You let me love you. There was this cancer between us and you let me love you.... It spreads Mitchell. All you’ve done is contaminate us all.” But with the shocking last moments of the episode means there’s no real choice:

Herrick: “I have something of a dilemma Nina...”