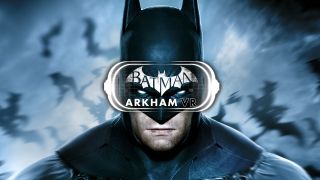 I’m not sure exactly when it hit me. Perhaps it was when I forgot that I was holding Move wands in the real world and naturally clipped the Grapnel gun to the utility belt around my waist. Maybe it was when I started throwing Batarangs to smash targets. Or maybe it was the ridiculous moment I lifted the cowl and placed it over my head, breaking into what I expect was the least Batman-like grin of my entire life. Whenever it was, the realisation that this is only the beginning was like a remote-control Batarang to the skull. I’ve been fortunate enough to have my head in a stack of virtual reality experiences, but nothing prepared me for what would happen when I played my favourite game with new eyes.

Batman: Arkham VR is the ultimate in wish fulfilment. It’s immediately clear why Rocksteady couldn’t resist returning to the franchise. The dev who popped the headset on me let me linger in the menu for a moment. I stood there, in the rainy Gotham of the Arkham games, feeling like I’d arrived in a Disneyworld - albeit one where the attractions try to murder the brooding guests in asylums. And this was all before I got to suit up with gadgets and gauntlets one at a time; before looking into a mirror and seeing Batman grimacing back; before I was lowered slowly into the Batcave, feeling like my knees might buckle with the sheer overwhelming sense of oh dear God, this is cool.

There are already countless ways to experience VR. From Google Cardboard to HTC Vive and everything in between, there are worlds just waiting for us to pop in and visit, but it’ll be these huge franchises that draw in the crowds. As a VR property, Batman is big news, but as a PlayStation VR exclusive, it’s a masterstroke. This is a world we know, a world we’ve spent hours in already, and, let’s face it, Sony is banking on us wanting to jump inside to check out Gotham from a new angle. If this is only the beginning of our foray behind the eyes of much loved characters, sign me up.

While Resident Evil 7, announced as being fully playable in PlayStation VR, adds further reassurance to the triple A development tier, it’s going to be the jaunts into existing universes that we won’t be able to resist. This is going to be a world initially filled with the word ‘experience’ instead of ‘game’, but if these go hand in hand with the Assassin’s, Skyrims and Witchers of the world, then I won’t complain. Imagine looking through Ezio’s Eagle Vision, arming yourself with Lara’s dual pistols or perhaps glancing down to see the half untucked jumper of Nathan Drake and then desperately realising you can’t tuck yourself back in or take the jumper out. Last one aside, that sounds pretty amazing.

Virtual reality versions of Fallout and Doom being casually thrown out at Bethesda’s E3 conference are no accident. This is a medium that’s currently inhabited by truly exceptional indie talent, it just needs the big boys to add further reassurance and, quite frankly, catch up. It’s just going to be a matter of developers working out exactly how without a sick bag on hand. Batman VR solves what’s known as the locomotion problem with a teleporting mechanic. In the crime scene level I played, preset spawn points were scattered around the area. Press the right Move button and you instantly appear there,  ready to study the world in 360 degrees without having to put your head between your legs and try and find some fresh Gotham air.

Gameplay wise, these can’t just be recycled versions of the main games, either. Arkham VR’s detective section saw Batman hunting down Nightwing’s killer. Unclipping my scanner from my belt - proving there’s already a worrying melding of hero and self - I could rewind the crime scene with a twist of the Move wand in my left hand, and pause it by holding it still. I rewound until Nightwing was alive again, ready for me to identify the sickening crunches that killed him. Every interaction was intuitive and absurdly natural, even after as little as ten minutes.

As much care has gone into crafting these very physical mechanics as all of the other Arkham games. If the Bat leads by example, the future of VR, especially on PlayStation, is bright. This is the technology we deserve, then, but when it comes to what we need, more wish fulfillment is the answer. Let us be the Bat, the Wasteland Wanderer, the last Dragonborn. We’ve visited these worlds enough. It’s time we stayed.