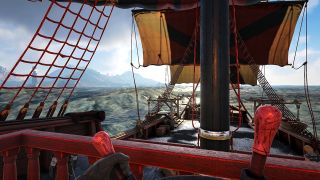 Before spring 2018, I had no affinity for pirates. Unlike many players, Assassin's Creed: Black Flag does not sit among the top of my rankings for its series. I also never got around to Risen, or Sid Meier's Pirates for that matter. Heck, I haven't even seen the Pirates of the Caribbean movies. It wasn't a setting I particularly cared about, but Sea of Thieves changed all of that for me. I've spent hundreds of hours since then sailing the seas, digging for gold, and mischievously living my best life as a scallywag.

When a new pirate game arrived on Xbox One after several months of PC exclusivity, I knew I had to dive in. To be fair, Atlas is not Grapeshot Games' answer to Sea of Thieves. With respect to the way that they play, Atlas and Sea of Thieves ultimately do most things quite differently. But because pirates are not nearly as ubiquitous as, say, zombies, for example, they still feel like they're on a collision course for timeshare among Xbox One and PC players. For that reason, I was excited to compare and contrast the two, and though my conclusions are mixed at best, I came away feeling like the ocean will be big enough for both ships... once Atlas properly patches up the holes in its hull.

The opening minutes of Altas are daunting. After a deep character customizer allowed me to adjust virtually every inch of my pirate from head to toe, I was thrust into a PvE server with my newly minted buccaneer, Waffles Portsmith. Starting on the introductory island, I was left to my own devices to begin carving out my own pirate legend. The only problem was the game's many menus and obtuse control scheme made those initial moments dizzying.

People talk about Sea of Thieves throwing players right into things without much hand-holding, but it's got nothing on Atlas, whose on-screen HUD options and menu items number in the dozens. Sea of Thieves is classified as an MMO, but it's not the kind of PC-centric MMO that can really take you for a spin like Atlas does. If you've played ARK: Survival Evolved, though, you'll be much more at ease with all the little boxes, meters, and messages all over your screen. Atlas borrows a lot its visual presentation from ARK, so Studio Wildcard's built-in fans will have a leg up.

Once I began to get to grips with all the menus and how to move through them, it was time for me to explore a bit -- maybe even find some pants. In Atlas, nothing is handed to you. You need to craft simple tools, ignite your own campfires, and eventually build your ships from scratch. There are no prefab galleons here. Six basic templates help guide you a little, but they're meant to be customized in numerous ways. The community is dedicated to making guides for others to follow, and proper ship building has become a fashion statement as much as it is a functional necessity. Unlike in Thieves where you buy or earn particular cosmetics, in Atlas you can create your own sails, tattoos, and more.

The best Xbox One games of all time

But like those early menus, exploration does not come easily. I couldn't help but feel like I was drowning  in all the game has to offer out of the gate, but that's not necessarily a good problem. A curse of too much content may seem like the perfect fit for virtual mutineers, but in reality it's a case of too much, too soon and the game's many systems can hardly be understood without a few YouTube guides. Left without weapons, food, or even that elusive pair of pants, my first few days of playing Atlas were actually me just watching videos to understand Atlas. Am I some dimwitted MMO newbie? Probably, but the on-boarding Atlas provides feels more like walking the plank.

If Sea of Thieves is pirate fantasy writ large, Atlas feels more like pirate reality, despite offering an array of mythological creatures and an infusion of magic, and that's one area where it stands out from its seafaring counterpart in a good way. Fending off scurvy, crafting items, and building bases on any of the game's many islands all come with the prerequisite that you figure out all those confusing foundational layers, but once you do, the systems in place are deep, giving the feeling of a true pirate life sim in a fantastical world.

One of Atlas' best strengths is its use of a persistent world that carries on with or without you. The game's ambition rivals something like EVE Online, where player-driven storytelling has reigned supreme for many years. Atlas has the potential to tell legendary stories in its own right. Players can build bases and claims lands as their own, only to have their meddle tested by any players who wish to invade.

You can join crews with others and soon patrol the seas with a fleet of foreboding Jolly Rogers waving in the salty winds, and because of an intensely involved skill tree, you can build precisely the pirate you want to be. Those pirates will always be there when you return, and so too will the massive world, though with conflict comes change, and the landscape of Atlas today will undoubtedly look very different years or even just months from now. That promise is what makes getting over the hump feel worthwhile.

I'd be remiss to dish 1,000+ words on Atlas and not mention how unstable it is right now. Alarmingly, a recent blog post from the game's lead designer calls it “the most polished [and] most stable” version of Atlas to date. If that's accurate, its previous state must have bordered on unplayable. Frame rate drops and menu delays are a guarantee on Xbox's Atlas right now, and the game's early launch has been hit by all kinds of different bugs, including one that prevented players from joining crews together, which is a real problem for this game in particular. To their credit, the developers have already released a patch for the game and more are coming.

There's also the fact that the game is still in Xbox Game Preview. That always comes with the disclaimer that you're jumping into pre-release software, and with that comes hiccups, but it often feels like Atlas is at the end of its plank. If the daunting introduction doesn't scare you away, the poor performance may, and that's too bad. The heart of Atlas is impressive, and I yearn to see what this game will look like a year from now. Studio Wildcard's ARK suffered from a similarly shaky launch and, though still imperfect, now boasts a faithful fanbase rivalling some bigger budget AAA games. Atlas has all the potential to carve out its own legend not in opposition to Sea of Thieves, but alongside it. They behave quite differently and though that means most players will enjoy one or the other,  those most faithful to living life at sea will find its worth sailing both ships.

Sea of Thieves has long been built on its credo of “tools, not rules” and it's a design philosophy that has helped the game find a dedicated audience. Atlas' version of piracy is one that is much more familiar to the MMO crowd, and with that comes a depth of gameplay hardly anything else on consoles really approaches. The developers have approached every element of the pirate's life like a giant island and they've dug holes all over the sand. In turn, there's some buried treasure here, but until the game improves its on-boarding and fixes its performance, pirates should steer clear of this island.