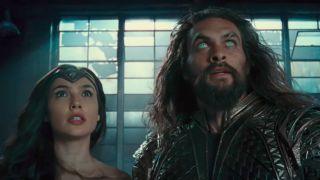 Consider this a bit of a non-shocker, but it was recently confirmed that Justice League will have a post-credits scene for those who are happy to hang out with the spilled popcorn and sticky floors for just a little bit longer. Jason Momoa, who plays Aquaman in the film, told the BBC about the scene in a recent interview.

"You’ve gotta sit through the whole thing and go through the credits. I forgot that it was in the script. It’s fantastic."

Not exactly the greatest of revelations then, since comic book movies helped popularize the post-credits craze, and Justice League is one of the year's most-anticipated films. Still, it's good to know that it's there, and Khal Drogo himself says it's "fantastic." As for what the sequence will actually show, that's anyone's guess.

I think it's fairly likely we'll get a tease of Darkseid, the DC equivalent of Marvel's Thanos: a being of almost god-like power who rules with an iron fist and causes death and despair in untold quantities. In the comics, Justice League villain Steppenwolf serves as his right-hand man, scouting out new worlds for his master to conquer. Judging by the giant omega symbol (Darkseid's calling card) seen in Batman v Superman's nightmare scene, this uber-villain is definitely lurking in the shadows.

Or it could be the League sitting down for chicken tikka masala in a nudge nudge, wink wink sort of play on the Avengers' fondness for shawarma. We'll have to wait until the film premieres on November 17 to find out.