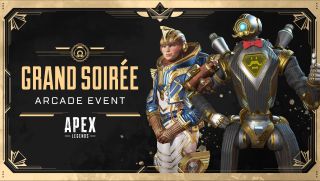 Apex Legends is ringing in the new year with a party fit for Gatsby himself - and with just as much murder! The Apex Legends Grand Soirée Arcade Event will begin on January 14 and run until January 28, and it's offering seven brand new limited-time game modes. You read that right, seven. Check out the trailer below.

The dress code is "formal skins" and the entire crew seems to have followed orders, donning an array of Art Deco inspired outfits and cosmetics. Pathfinder looks like a butler robot from an episode of Doctor Who (he even has a gold mustache), Bangalore is sporting some Egyptian-esque garb, and Bloodhound is all gold and teal like a Roaring Twenties skyscraper.

You'll be able to shop for a mix of Legendary skins and other on-theme cosmetics at a $5 price point, and six new Legendary skins will be added to the core loot pool. You'll also be able to get more rewards and enjoy more ways to earn with the new track system.

But what we're all really interested in are the game modes. There are seven rotating limited time modes that will rotate every two days. There are a few classics like Armed and Dangerous, but most of the game modes are brand new. Each mode will have three challenges worth a total of 1,000 Apex Points. Here are all the modes that will rotate throughout the Grand Soirée Arcade Event:

Just when I think I've stepped away from the drop ship for a while, Apex Legends sucks me back in with a brand new event full of innovative modes and tons of fun. I wish I knew how to quit you.

If you wanna play as good as you look, check out our Apex Legends tips.