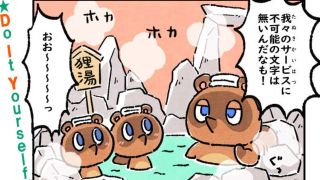 In anticipation of the release of Animal Crossing New Horizons, Nintendo has released a series of 4-koma manga depicting life as a villager in Tom Nook's world.

I couldn't find translations for the other two comics, but no. 1 looks like Tom Nook and a smaller Tom Nook rescuing a starved and frightened villager. No. 2 is particularly tough to decipher without English translation, but you can see some credit cards and Tom Nook relaxing in a hot spring with a couple of little Tom Nooks.

Nintendo has yet to release a translated version of the manga for western audiences, and I suspect it's unlikely they will. For now though, it's enough of a treat just to have something Animal Crossing New Horizons-related from Nintendo, as the wait until March 20 has frankly been agonizing.

For GamesRadar's Big in 2020 series, we previewed some of the things we're most excited about in Animal Crossing New Horizons, like the new crafting system, greatly expanded home and island customization options, and of course pole vaulting over streams. We also just got a look at the new catalog of fashion choices available in New Horizons, which finally includes sleeves for those bitter winter mornings.

Animal Crossing New Horizons is one of the best upcoming games of 2020, but there are plenty more to be excited about.