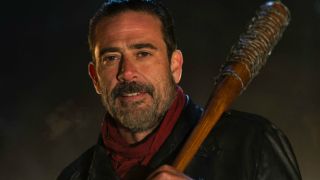 Rick Grimes’ final journey through flashbacks and dearly departed friends in The Walking Dead season 9, episode 5 was a pretty neat tribute to both the show and its leading man. It was, however, missing a certain someone in the shape of Negan, the man who has played such a huge role in the show’s later years. While fans may have questioned the absence of one moment between the pair, it appears that The Walking Dead season 9 actually cut a final scene which would’ve been a nice bookend to their fraught relationship.

As reported by EW, the scene involving Rick Grimes making his way through a familiar set of bodies in one of a several hallucinations peppered throughout the episode, not only featured Sasha giving him a pep talk, but also Negan getting his two cents in.

“Now that I’m gone – the widow aced my shit,” Negan says, referring to Rick’s mind still, even at such a life-or-death moment, ticking over with thoughts of Maggie putting an end to the former leader of the Saviors, before launching into one of his traditional machismo-fuelled tirades.

So, why didn’t it make the cut? Showrunner Angela Kang explains: “It didn’t feel like the right reflection… it felt like having characters that just really were pushing him to embrace the strength of moving forward was more what he needed as these hallucinations went on, rather than just somebody who was really kind of an enemy in the moment.”

That makes sense to me. Besides, Negan got his own moment to shine during Maggie’s very own (potentially temporary) goodbye to The Walking Dead. As good of an actor Jeffrey Dean Morgan is, having him appear in two emotionally-changed moments, and one of them littered with dead bodies at that would have been, if you can excuse the expression, overkill.

What next? Here's five questions we have after watching Rick's exit in The Walking Dead.