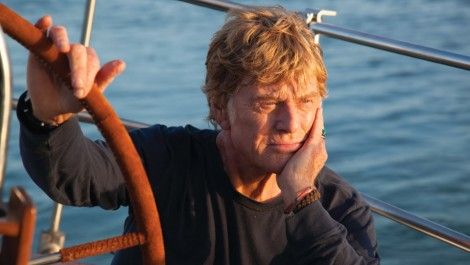 As Gravity and next month’s Lone Survivor prove, few things whiten the knuckles like a fight to survive in dire straits. Yet with both those films relying to some degree on big bangs, big budgets, backstory and consolatory companionship, a film starring a 77-year-old may yet have trumped them in stripping survival cinema to the bone.

J.C. Chandor’s follow-up to his surprisingly suspenseful banking yarn Margin Call has it flaws but it also has guts, depth and a star capable of holding the screen without a net.

Chandor gives Robert Redford’s seadog scant backstory, no name (he’s just “Our Man”), few words and little hope. The first orienting note is disorienting: we know he is “1,700 nautical miles” from the Sumatra Straits, if that helps.

When his boat is gored by a part-submerged cargo holder, Chandor casts him further adrift on the ocean, where Our Man fights to keep “soul and body” together in the face of isolation, injury, storms, sharks and sheer shitty luck.

Watching Our Man as he attends to the practicalities of drainage, eating, shaving and navigation, Chandor never cheats on his minimalist mission.

Borrowing one of Redford’s few words spouted, this is cinema du “fuuuuck!” at its purest. George Clooney does not emerge from the water to offer the cheery snifter of a Hollywood homily.

Without resorting to faux-emotive flashbacks or any get-out clauses, Chandor’s focus on one man and the elements is resolute. And – flashes of repetition aside – enthralling with it.

Our Man is resourceful, but so is Chandor. Like Paul Greengrass in Captain Phillips , he navigates tight spaces with a flair that immerses and terrifies as waves flip Our Man’s boat like a fateful coin-toss.

In the storm’s eye, however, Chandor’s primary character holds firm. Redford’s charisma shines like the stars he sails by, but his wrinkles and his restraint speak loudest, helping Chandor balance metaphors for age with the immediacy of events.

The teasing climax leaves us to answer the film’s key question: what would you cling to as death looms? But two things are left in no doubt. The Sundance Kid hasn’t lost it – and Chandor is quite a find.

With no 3D, no friends and no hope, Redford and Chandor show how survivalist instincts can stoke thrilling, thoughtful cinema. If Gravity grabbed you, hop aboard and hold tight.