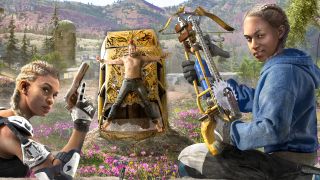 Far Cry New Dawn is already my favorite game in Ubisoft's open-world FPS series, which I would never have guessed, after it opted to pick up where Far Cry 5's divisive ending left off. The atypical post-apocalypse it paints is the perfect playground for open-world mayhem: wild, untamed, lawless, with a glimmer of hope for the future of our formerly ruined world. New Dawn takes place 17 years after the canonical ending of Far Cry 5, in which the entire world is ravaged by mutually assured nuclear destruction. Harsh nuclear winter has eventually subsided and nature has reclaimed the land, covering the once-ashen mountains of Montana in glorious bloom.

I recently had the chance at some extensive hands-on in the first three hours of Far Cry New Dawn and it was a blast, maintaining that distinct Far Cry flavor and frantic gunplay but with a refreshingly unique setting. We've discussed how Far Cry New Dawn will resurrect the series from a disaster of its own creation, but actually getting in there and mixing it up with the ruthless Highwaymen bandits shows a lot of promise for this spinoff sequel. Here are nine memorable moments that transpired in my hands-on time with New Dawn's reborn civilization; expect some minor spoilers ahead, but only for the game's opening three hours.

Read more: The Division 2 review: "A perfect example of how to absolutely nail a sequel"

Minutes after driving off from the new home base of Prosperity, I took on an exciting mission by the name of Deep Dive. Selene, a quirky medical expert who does drugs to take the edge off this new world, had dropped her much-needed supplies into a subterranean water-processing facility that looked like a portal into Hell. In attempting to retrieve her kit, I plunged into the pit, and the only way out was to bust some pipes and raise the water levels so I could swim to freedom. Selene nervously observed that crocodiles could be lurking in the drink - and sure enough, one sprang from the depths and grabbed hold of me moments later, results in some panicked melee and frantic gunfire. Once my real-world heart rate returned to normal, I successfully snagged Selene's kit and officially recruited her as one of Prosperity's new Specialists, the characters who will move the story forward and help you upgrade your camp.

Obviously the first thing every player wants to do is recruit an animal companion to fight by their side, and I'm happy to report that you can find and rescue Timber the Akita dog very early on in New Dawn. Timber's circumstances when you find him are dire: the Highwaymen have been rounding up dogs to use as meat, and it's your sworn duty to viciously murder all the scoundrels who would do such a thing. Once the coast is clear, you can free Timber and his fellow canine captives. Timber is so grateful for his freedom that he'll join you as a Fang for Hire, hopping into cars and panting gleefully whenever you pet him. Another Fang for Hire which I failed to find during my demo is Horatio the Boar, who will surely feel like players' Pumba.

3. Heard tell of a seemingly supernatural band of warriors

Once you've rescued your old boss, Thomas Rush, from Highwaymen captivity, he'll tell a story about some archers he saw defeat hostile bandits with their mythical abilities. Namely, these warriors seemed impervious to the bullets being sprayed their way, sniping their attackers with arrow volleys. These warriors are actually former Eden's Gate cultists who are so hopped up on the Bliss drug, they barely feel any wounds, at least in the thick of battle. I encountered a few of these archers in my travels, and they'll surely be a faction you can convince to fight by your side later in the story.

Speaking of drafting folks to join my cause, Nana already seems like she'll be a fan favorite NPC. This crackshot grandma can plug attackers full of lead from a great distance in between a litany of kooky observations. Getting Nana to team up with me and my Prosperity crew seemed easy enough, as I endeavored to impress her with my aim by shooting a series of simple targets and floating balloons. But Nana decides to up the ante for your final exam, firing off a flare that attracts Highwaymen in droves, forcing the two of you into a sniping party from the top of a tower. That's one way to get your kicks in old age.

5. Gave a bunch of looters a taste of their own medicine

As you roam New Dawn's open world, you'll often see little fox-like icons pop up on your minimap. These signal that a looter working for the Highwaymen is lurking nearby - meaning now's your chance to make a huge score. After you've fired a few shots, the looter will try to flee under cover of a smoke grenade, so you'll have chase after them or nail a precision headshot before you can ransack their stash. I had a hard time resisting the hunt whenever that fox icon popped up on my screen, and vaguely felt as though I was gunning down a legion of Highwaymen who idolize Dora the Explorer's thieving nemesis Swiper.

If you played through Far Cry 5 and scoured Hope County in search of allies, you may remember Larry Parker, the alien conspiracy theorist who recruits you for his paranoid schemes. While I wasn't able to find what became of Larry himself, I did manage to locate his bunker, filled with posters for vintage sci-fi films and plenty of useful supplies. It was also the final resting place for a poor sod who got trapped inside when he accidentally activated the electrified defenses on the bunker's hatch, which I had to disable after clearing out curious Highwaymen. These nifty side-missions are classified as Treasure Troves, where you can uncover some valuable crafting materials once you've deduced how to find them. They also seem like the perfect opportunity to explain what happened to many of the NPCs from the previous game.

In another Treasure Trove attraction, I found notes describing someone's attempt to befriend a bear in the nearby woods. This bunker dweller has successfully trained a bear to come hither on command - in this case, at the sound of a nearby church bell - but his friend always suspected that the wild animal would be their downfall. Sure enough, the bear had seemingly eaten his would-be pal - and in doing so, ate the keys I needed to access a bunker full of supplies. Though it gave me no joy, I summoned the bear via the Pavlovian sound of the bell and took it down with a handful of shotgun shells, gaining access to my prize and hopefully bringing some peace to the devoured denizen's soul.

8. Searched for remnants of the old world

In an ingenious bit of extracurricular activity, New Dawn rewards players who knew Hope County like the back of their hand through the Dear Photograph sidequest. In Prosperity, you'll find a collection of photos taken before the nuclear blasts, depicting iconic buildings from around the old Hope County countryside. In a moment of bittersweet nostalgia, you can seek out what these landmarks look like now, provided you can find them - and what you discover might be more than a little depressing. I couldn't be sure during my playthrough, but it seemed like the Dear Photograph locations didn't have obvious minimap icons - and I think it'd be a commendable challenge if players were forced to find these echoes of the past for themselves.

9. Took down a Level 3 animal by the skin of my teeth

In a potentially contentious move, New Dawn steps outside the established Far Cry formula with some light RPG elements, including levels assigned to guns and enemies. Highwaymen and animals roaming the world will be one of four ascending levels - and if you try to take down a Level 4 bandit with a Level 1 firearm, it sounds like you're going to have an extremely tough time. The moment I realized how bad this might feel is when a Level 3 bear pounced on me out of nowhere, and I felt like I was barely damaging it despite countless shots from my Level 1 shotgun and assault rifle. Fortunately, two friendly NPCs were nearby to lend a hand, and Timber chewed the bejeezus out of the bear's thick hide. I was victorious this time, but I have to wonder if fighting Level 4 Highwaymen will suffer from the same disconnect as the launch version of The Division, where ordinary human thugs could withstand low-level bullets to the head without so much as flinching. We'll have to wait and see if New Dawn's leveling elements feel satisfying, or simply inhibitive.

Far Cry New Dawn is one of our most anticipated new games of 2019.