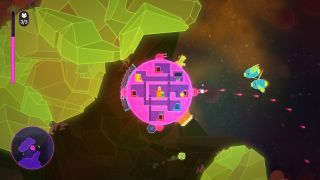 One of this month’s free PlayStation Plus games (and a recent Xbox Games with Gold title), Lovers in a Dangerous Spacetime is a multiplayer action-shooter that can be difficult for newcomers to get to grips with. The game focuses on the extraterrestrial conflict between the League of Very Empathetic Rescue Spacenauts and evil aliens that are known as Anti-love. These foes have been kidnapping space animals and destroying many of your bases, so it falls to you to make yourself known and stop the tyranny from spreading even further. This is easier said than done, though, as it’s remarkably common for newcomers to feel overwhelmed by the relentless waves of enemies and the many objectives you’re expected to balance.

In appreciation of this fact, we’ve decided to put together a list of tips to help you excel at the game. Whether you’re playing with a group of friends or on your own, the following should make saving the universe from the forces of Anti-Love that little bit easier:

The number one rule of playing Lovers in a Dangerous Spacetime is communication. Dumped into a spaceship together, you and the other players must control different aspects of the same vessel, with your level of progress dependent on your ability to cooperate.

Being a maverick is simply out of the question. Instead, you need to take the time to talk to each other and divide the various tasks between yourselves. Is one person particularly good at twitch gameplay? Then have them stationed on the shield. Is another a crack shot? Then have them moving swiftly between the gun turrets. Allocating these activities will make your adventure far less chaotic, as everyone will know their roles and coordinate appropriately.

If you find your initial set-up isn’t working, you also shouldn’t be afraid to mix things up. Just make sure to communicate your concerns with the other players.

Gems can be found throughout each map. They’re hidden inside of question-mark boxes and are used to upgrade parts of your spacecraft. Your shield, weapons, and engine can all be enhanced over the course of the game, providing you with useful improvements such as stronger defenses, better guns, and more powerful engines.

So rather than rushing off to the finish a level after unlocking the exit, it’s worth waiting around and exploring some more, to see if you can actually improve your ship. This will undoubtedly make you better prepared for whatever the game throws at you next.

Look Out for Health Pick-Ups

If your health bar is ever low, you needn’t panic. In every level, it’s possible to find hearts that restore life. These come from a variety of sources, appearing inside of boxes labelled on your navigation system, within cages that hold kidnapped animals, and as plants that can be harvested from nearby planets.

It’s important you keep an eye out for these. After all, if your ship ever falls into disrepair, they can mean the difference between life and death. Try to have one of your players checking the radar at regular intervals. It’s the best way to keep abreast of your surroundings.

Though it may be tempting to have someone continuously man the shield, it’s sometimes just as effective to keep the ship moving, maneuvering around incoming enemies and projectiles. This approach allows you to dodge the more formidable attacks that can pierce your shield and lets you constantly reposition your spacecraft so that your gunner can get a clearer shot.

Should you decide to use this method, you should make sure you to devote some time to levelling up your engine. Otherwise you may find yourself moving too slowly to pull it off.

Enemies will often try to surround and overwhelm you. A good way of decreasing this threat is to park your vehicle close to land whenever possible. This will block assailants from being able to attack you from all angles, giving you and your partner(s) fewer areas to defend. You can then utilize this time to focus on other areas where you’re vulnerable or to launch a counterattack.

If you’re finding it hard to defend, strategies like this can really make all the difference, as they give you a larger window in which to react.

An alternative way of dealing with the swarms of anti-love is to use your Yamato cannon. In contrast to your other weapons, it’s much stronger and orbits your spacecraft rather than being controlled by anyone. Because the cannon persistently rotates around your ship at ease, it requires careful timing to be used effectively. Fire just a second too late and you’ll miss your target entirely and be locked out of using it for a spell.

For the best results, you should wait for the cannon to reach a spot just prior to pointing directly at the enemy, before unleashing your attack on the horde. This will guarantee your assault does the maximum amount of damage.

Use Your Pet Assistants

When playing on single player, you’ll be able to choose from a selection of loyal space pets. These four-legged companions are a lot quicker at traversing the spacecraft than the player and can be ordered to control the guns or the shield.

To succeed, you should take advantage of their speed boost, making them rush from turret to turret while you focus instead on steering and navigation. You can respond quicker to impending threats this way.