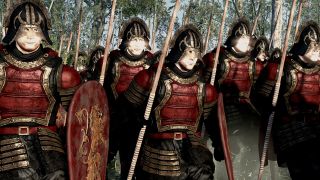 Game of Thrones is over for another year, and the prospect of waiting till late 2018 for our fantasy fix is almost unbearable. As Jon Snow and his motley crew head out to face the horrors from beyond the Wall, we’re left to contemplate how to fill our Sunday evenings. Season 8 might be a long way off, but the wait needn’t be dark and full of terrors. With hundreds of characters, personal drama, and political intrigue, George R.R. Martin's A Song of Ice and Fire has been a haven for modders looking to bring his grizzly world to life. I’ve searched the depths of the Citadel to find the very best Game of Thrones mods to help sate your bloodlust during the Long Night.

Mount and Blade: Warband – A Clash of Kings

Cozur released his Mount and Blade: Warband mod way back in 2012 and has continued to release new updates for every season. Adding naval battles, sea travel, thousands of custom items, props, and textures, plus a huge map of Westeros and loads of characters based on the A Song of Ice and Fire novels, this Clash of Kings mod is one of the most impressive out there. Rather than playing as one of the show’s main characters, you get a unique view of what fighting is like for the common soldier. A Clash of Kings sets you out as a humble peasant caught up in the turmoil of war, which will see you pledge alliances to various houses and crush those that oppose you on the battlefield. You’ll need all the cunning of Tyrion Lannister and the treachery of Petyr Baelish if you want to survive the bloody battles and rise through the ranks. If you like the idea of fighting alongside Stannis Baratheon, conquering Harrenhal, or sending the Lannisters your regards, then this Mount and Blade mod will certainly deliver.

Skyrim – The Game of Thrones Adaptation

View the mod page at ModDB

This Game of Thrones mod aims to completely transform Skyrim into the world of Westeros, changing everything from the soldiers you encounter (Imperials/Lannisters) and the places you visit (Windhelm/Winterfell) to forge a completely lore-friendly environment. In addition to meeting hundreds of characters from Game of Thrones, you'll also be able to recruit unique followers to accompany you as you fight your way across the Seven Kingdoms. From the brutish Sandor Clegane to the deadly Arya Stark, you can share your adventure with your favourite characters. What’s most impressive about this overhaul is that it doesn't just focus on adapting content from Skyrim, it also plans to add new locations which are built and populated entirely from scratch. Unfortunately, the ambitious nature of this mod means you can't play it just yet, but it’s definitely worth bookmarking for the future!

The Total War series is known for its extensive war-themed mods and the franchise is ripe with opportunities for Game of Thrones fans to get stuck in. If you like to think of yourself as a master strategist like Tywin Lannister, then this mod will give you plenty of opportunities to put your battle tactics to the test. With over 25 playable armies and 30 photorealistic characters, this visual overhaul strives to painstakingly recreate and depict all major land forces of the Game of Thrones universe using equipment, uniforms, and general aesthetics from the series. You can fight off hordes of terrifying wights or even take control of Jon Snow’s Northern army as you attempt to reclaim Winterfell from Ramsay Bolton. Recreating Game of Thrones’ massive historical battles has never been easier.

This conversion mod for Crusader Kings allows players to choose from any start date in the 300 years before Aegon's Conquest to the beginning of the fourth book (A Feast for Crows). Paradox Interactive’s grand strategy game may be getting on a bit now, but it's hard to find a mod that allows you to explore the 'what if?' scenarios of the series. Your game will quickly veer away from the narrative you remember and turn into an extremely volatile world where anything could happen, reflecting the series itself. Having alternate scenarios where Rhaegar Targaryen killed Robert on the Trident or seeing Stannis take King’s Landing means that every playthrough is unique. After all, there are no guarantees as 'when you play the game of thrones, you win or you die'. Try not to die, though.

There are plenty of Game of Thrones mods that take place during Robert’s Rebellion and depict the wars between both Stark and Lannister, but this mod takes you back in time before the Seven Kingdoms were even carved out. In Westeros: Age of Petty Kings you forge a house of your own as a king battling it out with The Andals long before Aegon the Conqueror rose and unified the continent. Even though the mod is set thousands of years before the events we've been watching and reading about, there are still plenty of familiar names around. You'll still find the Starks in Winterfell, the Martells over in Sunspear, and Tyrion’s forefathers at Casterly Rock. The mod offers a great history lesson for those looking to delve into Game of Thrones’ past, as creator bertio5 has carefully woven together huge amounts of lore and details depicting the lesser-known characters and houses. Will your dynasty last to stand a thousand years, or will it fade away into history?

Civilization 5 – A Mod of Ice and Fire

If you’re after hands-on management and plenty of political intrigue, Civilization 5’s A Mod of Ice and Fire offers just that. The mod adds a huge sprawling map of Westeros and the Known World along with completely revamped Game of Thrones-themed civilizations. Every Civ has a unique trait, three special units/buildings, and city names appropriate to their individual house. There are also a host of religions with civs following the Lord of Light, the Seven, the Old Gods and a bunch of other lore friendly followings. You can wage all-out war with the great navy battalions of the Iron Islands, battle it out against Drogo’s Dothraki hordes, and even come face to face with Daenerys’ terrifying dragons. However, if you wish to negotiate alliances and tactically kill off those who threaten your rise to power, then a Petyr Baelish approach may be preferred. The battles don’t stop there as the pesky barbarians have been replaced by White Walkers, giving you greater sense of dread as they shamble into your surrounding territories.

Age of Empires 2: HD Edition – War of the Five Kings

Age of Empires 2 is still a hallowed RTS. It's well worth playing and is widely regarded as one of the best strategy games to grace our monitor screens. Its popularity has brought with it a whole host of Game of Thrones mods, but the most revered is the War of the Five Kings. The mod recreates the devastating civil war that erupted in Westeros following the death of King Robert, so if you’re looking to take a trip down memory lane without watching season one for the tenth time, then this mod might be what you’re looking for. There are a total of eight houses and players can join the Tullys, Lannisters, Starks, Greyjoys, Tyrells, both Baratheon brothers, and the other major factions in the War of the Five Kings. If you’d rather ditch the vanilla feel of the War of the Five Kings, be sure to check out the multiplayer exclusive Diplomacy Overhaul mod, which drastically changes the direction of the game, shifting away from combat and forcing you into a world of resource management and political backstabbing.