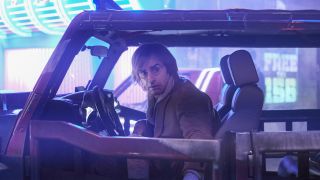 We all love Netflix for its binge-worthy TV shows - powering through an entire season of House of Cards, Daredevil, or Stranger Things, is a fine way to while away the hours - but did you know there’s more to the streaming giant than its addictive serialised dramas? Netflix is quickly turning itself into a fully-fledged movie studio, recruiting A-listers like Brad Pitt and Will Smith to star in its ambitious original films. Drama? Comedy? Science fiction? You want it, Netflix has it. Here’s a look at the eclectic mix of new movies they’re premiering in the coming months.

The movie: After 2015’s The Ridiculous Six and last year’s The Do-Over, Adam Sandler notches up his third Netflix movie playing a ‘90s Los Angeles talent agent with a roster of eccentric clients. This is a Sandler comedy with a romantic twist - Wexler ends up falling in love with Jennifer Hudson’s singer Courtney Clarke, and the pair’s relationship is shown over the course of a decade. All the usual Sandler cohorts - Kevin James, Rob Schneider, and David Space - are present and correct, so don’t expect the smooching to completely outweigh the slapstick.

The movie: Nicholas Hoult and Henry Cavill going to war? This has nothing to do with any Marvel vs DC beef, instead the pair are teaming up for an Iraq drama about US soldiers sent to repair a water pumping station in the volatile village of Baqubah. Hoult’s machine gunner and Cavill’s special forces captain find themselves in the line of fire as the locals turn against them, leaving their platoon in a tense fight for survival. Sand Castle’s screenwriter Chris Roessner based the film on his own experiences as an Iraq veteran, so this has all the makings of a brutally authentic war flick.

The movie: Jeff Garlin is best known for playing Larry David’s long-suffering manager on Curb Your Enthusiasm, but he’s also directed several shorts, films, and documentaries. For his latest offering he’s teamed up with Netflix to write, direct, and star in this comedy about an LA homicide detective, Gene Handsome, whose rocky personal life threatens to scupper his crime solving career. Netflix favourite Natasha Lyonne leaps over from Orange is the New Black to play Handsome’s fellow detective, the brilliantly named Fleur Scozzari, while The Big Bang Theory’s Kaley Cuoco will pop up playing herself in a cameo role.

The movie: Brad Pitt sports grey hair and an Aldo Raine-like accent to play Dan McMahon, a cocksure US general whose NATO operation in Afghanistan is cut down by a journalist’s stinging exposé. A dark comedy that Netflix describes as “part reality, part savage parody”, War Machine looks like a clever mix of Three Kings and Dr Strangelove. With Animal Kingdom’s David Michôd on board as director and a supporting cast featuring Ben Kingsley and Tilda Swinton, we could be in for a real treat with this one.

The movie: Snowpiercer director Bong Joon Ho made his name with monster horror The Host, but his new Netflix film looks like a gentler kind of creature feature. Tilda Swinton, Jake Gyllenhaal, and South Korean star Ahn Seo-hyun are among the cast for Okja, which follows a young girl’s quest to save her best friend, the titular beast, from the clutches of the sinister corporation that created it. The mysterious teaser trailer gives little away, but with a $50 million budget behind it and the South Korean director’s impressive track record consider us intrigued.

The movie: Ever wondered what a Marlon Wayans version of Groundhog Day looks like? If the answer is yes then you’ll need to watch his new Netflix comedy, Naked. Wayans plays Rob Anderson, a groom-to-be who spends the night before his wedding getting epically drunk with his best man. The next day he wakes up naked in his hotel with only an hour to get to the church. Forced to relive this same 60 minutes on repeat, he battles through a city marathon, police, and a motorcycle gang on his way to the altar - presumably picking up a few vital life lessons along the way.

The movie: The beloved Japanese manga series gets the movie treatment with Nat Wolff playing Light Turner, a young genius handed a notebook giving him the power to kill anyone simply by writing their name inside. The Guest and Blair Witch director Adam Wingard is well-suited to bringing the scary, supernatural edge required, while Willem Dafoe seems like the perfect choice to play sinister spirit Ryuk. However, Death Note arrives with its fair share of controversy - some fans have accused the film of whitewashing and launched a petition encouraging a boycott ahead of its summer premiere.

The movie: Orcs! Elves! Fairies! Will Smith! This is a genre-splicing cop thriller about a world where humans and mythical creatures co-exist. The plot sees Smith, reuniting with Suicide Squad director David Ayer, team up with Joel Edgerton’s Orc officer to track down a weapon that all sides are willing to kill for. Think End of Watch with a fantasy twist. Produced for $90 million, this is the most expensive original movie Netflix has ever made and screenwriter Max Landis has described it as his attempt to create a Star Wars-style universe. Could sequels be on the horizon?

The movie: A passion project for director Duncan Jones, this science fiction mystery tracks a mute bartender (Alexander Skarsgård) as he makes his way through a futuristic Berlin in search of his missing girlfriend. Drawing inspiration from Casablanca, Blade Runner, and Alien, Jones has called this his “spiritual sequel” to Moon and the second instalment in a loosely-connected trilogy. Alongside Skarsgård, the cast boasts Paul Rudd, Justin Theroux, and Sam Rockwell back playing his Moon character Sam Bell.

The movie: Robert Redford and Jane Fonda first shared the screen in 1966’s The Chase, and more than 50 years later they’re back for a fourth movie together thanks to this romantic drama. Based on Kent Haruf’s novel, it casts the Hollywood legends as a widow and widower who find love in their twilight years. The Fault in Our Stars duo Scott Neustadter and Michael H. Weber are behind the script, meaning you’ll probably have to brace yourselves for a tearjerker of epic proportions.

11. First They Killed My Father

The movie: Angelina Jolie continues her directing career with this adaptation of Loung Ung’s memoir about the suffering inflicted by the Khmer Rouge in Cambodia. Ung was cut adrift from her family as a five-year-old in the mid-’70s during the time of the Cambodian genocide, and the harrowing story has personal significance for Jolie - she adopted her eldest son Maddox from Cambodia while making the Tomb Raider sequel. Jolie has called the film “a love letter to Cambodian people” and a way for Maddox “learn about who he is”.

12. A Futile and Stupid Gesture

The movie: Remember when the name National Lampoon was plastered across comedy classics like Animal House and Vacation? This biopic delves into the brand’s origins as a humour magazine, charting founders Doug Kenney (Will Forte) and Henry Beard (Domhnall Gleeson) as they reshaped American comedy through the ‘70s and ‘80s. It features some well-known comedy faces… playing well-known comedy faces. Joel McHale is Chevy Chase, Seth Green is Christopher Guest, and Jon Daly will play a Caddyshack era Bill Murray. Not too shabby, eh?

The movie: A science fiction drama shrouded in mystery (and with a title sounding a lot like fellow Netflix original The OA), this sees The Leftovers star Margaret Qualley play an apocalypse survivor who races to save Earth just as the final escape shuttle is departing. Marvel veteran Anthony Mackie will co-star as a drifter who helps Qualley’s character in her quest to cure the poisoned planet, while Danny Huston features in an undisclosed role. Could this be Netflix’s answer to YA juggernaut The Hunger Games?

Simon is a film and entertainment writer with a love for The Simpsons, Bruce Springsteen, and a long-standing delusion that he’ll one day play for Nottingham Forest.
See comments