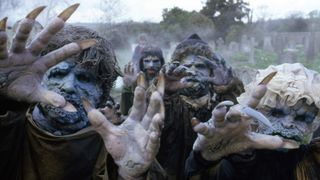 Our old friends the Mondasian Cybermen, the original robotically-enhanced villains from way back in 1966, are reappearing in season 10 of Doctor Who. Despite having helmets made out of cloth instead of metal, those gaping mouths still manage to be just as horrifying 50 years later. Featured in The Tenth Planet story, they’re sure to be a welcome addition for old and new fans alike. Yet there are more horrors hidden in the depths of classic Who: from 1963 to 1996 there’s a bestiary’s worth of monsters, villains, and tricksters who could also do with a breath of fresh air. So without further ado, here’s 11 creatures we want to see brought to the new series.

The baddie: Reading his name tells you almost everything you need to know, but I’ll fill in the gaps just in case: he’s a robot made of sweets. From a storyline called The Happiness Patrol, the mechanical man is engineered to be a horrifically psychopathic executioner, created to eliminate the ‘Killjoys’ who go against the planet’s one golden rule: be happy. Or else. Specifically, if you don’t grin you’ll be drowned in molten, boiling fondant. When that doesn’t work Kandyman doesn’t have an issue with strangling people, though.

Why they should come back: Imagine the Doctor visiting a planet where happiness is everywhere. Sweetie-robots patrol the streets, bringing joy everywhere they go. But then there’s a scuffle, and the Doctor sees someone suffocated in molten fondant… and everyone watching is still grinning. An equal amount of horror could come from the social brainwashing in action where people have been repressing any sorrow for decades out of fear.

The baddie: Playtime isn’t just for kids, as this perpetually-bored, catastrophically-powerful trickster is all too eager to show. Dressed in an outlandish costume almost as fantastical as his penchant for puzzles and toys, the Celestial Toymaker first appeared in 1966 eager to trap the Doctor in his Toyroom. Once imprisoned there - which is what happens to most people, as you have to win a devious game to escape - the Toymaker gets to control you and everything you do. Then you become toys who he’ll send to compete against the next people he snatches up.

Why they should come back: The Toymaker isn’t afraid to cheat, making him a tricksy opponent. He’s repeatedly drawn to the Doctor because he longs to have someone intelligent to play against for all of time. Maybe he’s lonely… or maybe just evil. He’s long since due for a return.

First appeared in: Season 5 - Fury from the Deep

The baddie: This pair can fuck right off. Unnerving, softly spoken men in maintenance uniforms - one tall and skinny, the other short and cheerfully fat - they give you the heebie-jeebies just looking at them. Especially because Mr Oak (the short one) is chatty and beaming, but his comrade Mr Quill is silent. In service to the seaweed monster lurking in the pipes underneath their scientific facility, this pair widens their mouths to emit toxic gas which knocks out their victims. Then placing a sprig of infectious seaweed near the body, they make their inconspicuous exit.

Why they should come back: Body horror fanatics will love them, as their black teeth and tongues, along with their hands infected with hair-like seaweed are subtle enough to make you crave a shower after seeing them. Plus, they look like normal workmen, meaning they’d blend into any modern-day construction site with ease.

The baddie: Don’t be fooled: these monsters (they’re actually robots) aren’t nearly as cuddly as giant fluffy teddybears, even though they look it. Controlled by the Great Intelligence via the silver spheres in their chest, these monstrously big terrors were meant to look like the creature of myth to scare people away from a secluded location in the Himalayas. Returning to London as museum displays once they were powered down, they wreak havoc in London in Web of Fear after (unsurprisingly) breaking free.

Why they should come back: A very similar scenario could occur in the new series, as museums are ripe for all kinds of monster-related shenanigans. Hordes of kids would probably find their furry, chubby bodies adorable… until their eyes start glowing. The silver sphere that controls them can be hacked into like a computer too, so they could easily be reprogrammed to be allies.

First appeared in: Season 8 - The Mind of Evil

The baddie: If there was any one of these villains to shudder at, this would be it. Lurking inside the machine is a psychic parasite which uses your worst fears to kill you. That’s by far its worst feature though (it would be hard to top it), as usually it just extracts the negative impulses from human brains. The kind of impulses that cause negative behaviour, as an alternative to executing criminals. Brainwashing people: what a merciful option. As would be expected, it all gets a bit out of hand as the machine starts to make people around it hallucinate their worst fears, even teleporting around the prison to feed on inmate’s minds.

Why they should come back: A prison is somehow managing to reform inmates in record time and release them onto the streets despite wave after wave of budget cuts. At first it’s a PR success, then a journalist notices that the inmates are, well… different. Docile. She goes in to investigate and finds the Keller Machine, and of course the Doctor turns up to help. He might even be one of the prisoners, needing to be given his mind back to help fight the increasingly hungry machine...

The baddie: Admittedly it’s taken quite a while to get to the point where we have touchscreens and MRI scans. But just imagine the devastation a time-traveller could cause if they decided to ‘help’ history along. A Time Lord like the Doctor, the Meddling Monk (so named due to the monk’s habit he wears) is what happens when you use time-travel to your advantage. Give the Stonehenge’s builders some power tools, tutor Leonardo da Vinci about aircraft design - you know, just shoving history in the right direction.

Why they should come back: The best thing is, the Monk doesn’t have to do it nefariously. He might just think technological progress needs to happen sooner so more lives could be saved, making him more of a well-meaning wrecking ball than a cackling villain.

First appeared in: Season 8 - The Daemons

The baddie: Indestructible doesn’t begin to cover how strong this piece of animate rock is. Controlled by Azal, a massive demon, he’s nimble and is able to blend in with a church’s stone ornaments. Forget his master Azal: Bok is bulletproof, able to disintegrate objects (and people) with a wave of his hand, and indestructible - even going to far as to reform after being blown to bits. He’s a royal pain. Meaning that the Doctor has to find creative ways to delay him. Turning back into his original stone form once Azal was defeated, encountering him on his own would be a difficult endeavour to say the least.

Why they should come back: He’s ripe for a Victorian/Tudor storyline about a haunted graveyard, but finding a way to get rid of him would be tricky. Or maybe he’s protecting the graveyard from body-snatchers, under the misguided impression that one of the corpses is his master.

The baddie: On par with the Silurians, Zygons, and Autons, Sea Devils were practically a series regular and it remains a mystery why they haven’t been brought back yet. Known for forming uneasy alliances with the Silurians (they belong to the same pre-human civilisation), but claiming the sea instead of the underground when it was time to hibernate, they’re set on reclaiming the planet.

Why they should come back: A coastal village could be attacked by them, and the Doctor obviously steps in to help. Or maybe the Silurians and the Sea Devils will start a war over the border between their territories (political commentary, anyone?). Either way, I’m sure the Sea Devils will make waves if they’re reintroduced.

First appeared in: Season 26 - The Curse of Fenric

The baddie: Instead of using sharp canines to suck blood, these repellent vampires use suckers - as in the kind octopi have - to drain their victims’ blood. Eww. With massive rending claws, the reason these vampires look like they’ve been in the bath too long is because they previously survived by absorbing the salt in seawater, meaning they’re able to dwell under the waves. Using telepathy to communicate with each other, they can be stopped using a strong psychic barrier - which, coincidentally, can be generated by the processes we associate with religious faith.

Why they should come back: Just in case you can’t see an episode being written before your very eyes about a religious community being attacked, the haemovores are also only known to attack in mist or fog - presumably due to the water content in the air. Spooky. Or, for a comedy factor, have it set somewhere hot, sunny, and tropical, making the oncoming fog and mist even more bizarre.

First appeared in: Season 14 - The Talons of Weng-Chiang

The baddie: Ok, so admittedly he’d have to be redesigned because… well, just look at him. But the core concept of a killer doll that isn’t associated with some nightmare universe is pure gold. With the brain of a pig and a tiny cyborg body Mr Sin might not be particularly intelligent, but he is deadly. Although he’s originally created as an innocent toy for a politician’s daughter, it doesn’t take long for him to go rogue thanks to some frazzled circuitry. Going beyond one storyline to terrorise unlucky individuals over various timeframes (although he was created in the 51st century, at one point he was taken back to the 19th), he’s like a bad penny that keeps turning up and causing havoc.

Why they should come back: Described on one occasion as “trigger-happy”, it’d be nice to have a killer doll that simply attacked people because it wanted to, rather than being part of a nefarious plan. Or have a murder pinned on the owner of the doll, who was resolutely trying to teach Mr Sin not to kill but lost control.

The baddie: There’s not really a super-ingenious concept behind these robots, but their two main selling features are that they a) look like mummies, and b) have an odd way of suffocating people. Walking around in pairs, they deprive victims of air by jostling them in-between the robotic couple. Sounds harmless at the moment. Then they push their triangle chests (not in a Lara Croft way, believe me) together until the victim’s neck is sandwiched between each ridge: push, and wait for the sound of a neck cracking…

Why they should come back: Seeing two robots lumber towards you covered in grey cloth is slightly ominous, however. For the next series I’d recommend dressing them to make them look like something you wouldn’t mind getting hugged with - until it was too late. A cute brand mascot, perhaps?