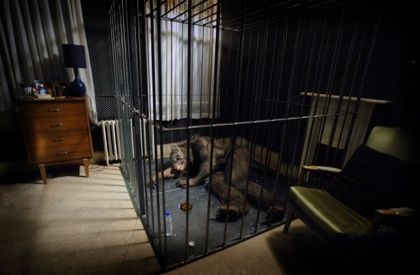 How come nobody cracked a Captain Jack gag the whole episode? You’ve gotta love the idea of Vampires Anonymous, though ...

The One Where: George writes a list and puts the wolf to sleep, getting a new girlfriend, a new job and lycanthropic Tourette’s in the process. Mitchell and Ivan team up to found vampire AA in an attempt to stop Bristol’s rising human body count. Annie meets a ghost who helps her overcome her fear of small electrical items acting as hotlines to the otherworld. Meanwhile, Nina volunteers to undergo Professor Jaggat’s experimental procedure in the hope it will make her fully human again.

Review: There are some shows where you can miss an episode or two, switch back on and, one “previously on...” montage later have caught up with everything you’ve missed. Hell, on its current form I missed about six of the last series of Heroes and still managed to pick up everything I needed before the finalé. But this week’s Being Human is the other end of the scale even taking into account its usual action-packed pace – be warned, if you so much as pop to the kitchen for a party ring and a mug of tea when you come back you really won’t know what’s going on.

George has got a new job, handed his notice in, left the hospital, found a new squeeze, slept with her and been fired in two thirds of an episode – somewhat negating his grief at Nina’s departure and protestations of being deeply in love with her even if we charitably allow for the concept of him being on the rebound. Meanwhile Annie has met a ghost who, despite claiming not to be a TV watcher, is clearly modelling his sartorial style on one Captain Jack Harkness and who teaches her to thwart the men with sticks and ropes permanently. And Mitchell? Well he’s lurching ever further down the path to oblivion, with Ivan whispering into his ear the entire way like a Brutus to his be-fanged Julius Caesar. There’s a lot shoehorned in here and it means the pace feels hurried and uneven despite some cracking moments. George’s Tourette’s is cringeworthy at points, while his response to his bullying boss in particular (he might have an IQ of 156 and a werewolf fighting to get out, but the boy is not too bright) and a couple of supply teacher jokes feel jarring.

Brian Dick as Sykes is not quite as endearing as Gilbert, but gives us a few laughs and lots of intriguing background to Terry Wogan’s posse of evil, or gatekeepers as we now know to call them, while Annie’s confrontation with the evil version of herself and the finality with which she shuts the door raises some interesting prospects on Annie’s arc for the second half of the series. Ivan is back – thank goodness – with some of the best lines, and manages to cut through the cheese of the pseudo-AA meeting like a knife through, well, something cheesy. His reasoning for signing up to the blood-detox programme, and developing “frenemy” style relationship with Mitchell is one of the highlights of this series for me.

However, despite some intriguing supporting characters (including Lucy, who is clearly not the big evil we had been led to assume by the first few episodes), the best part of the show by some distance remains the moments when our supernatural triumvirate are together. The camaraderie between them provides both the biggest laughs and most emotional resonance, although Mitchell’s comment to Annie about Sykes arriving to help her - “All the stuff that’s been happening lately and this guy just happens to turn up?” - is worthy of the biggest forehead slap of the week knowing now what we know about Lucy.

Overall this is an imperfect episode, but the hardest heart can’t fail to be moved by the haunting final image of a naked – human – George lying in his cage weeping in horror at his loss of control, the ripped up remains of his list of plans on how to become normal lying on the bedroom carpet in front of him, proof that at the top of its game Being Human can be achingly brilliant.

Being Human seems to work best when creator Toby Whithouse takes scribe duties too and – despite some stand out moments – neither this week or last week’s (by Lucy Catherine) hit the spot in the way Whithouse’s scripts have so far this run. I understand it’s a lot to take on for him to write the entire series, but this week’s is arguably the worst episode of Being Human so far. And while admittedly the worst Being Human is still better than 95 per cent of all other TV out there, I think we need to nip this in the bud. There’s only one thing to do. Clone him. Now.

Flashbacktastic: Kemp and Jaggat met a year ago after Lucy wrote some “wonderful” papers about identifying a gene that could be the cause of all evil. It appears Kemp recruits her to the shady organisation.

Pop culture reference of the week: After George throws a strop having cooked up a storm for Annie to “taste” by proxy: “Clearly SOMEONE has been watching too much Gordon Ramsay!”

Soundtrack of our times : “Bad to the Bone” by George Thorogood is an apt song for George’s first outbreak of werewolf-repression inspired swearing.

Gone but not forgotten: The vampires return to their front organisation - B Edwards, Funeral Parlour.

Our world but not: Vampires use “emo message boards” to find willing victims to be drunk from, proving that giving your bank details to spammers is not the worst mistake you can make online and bringing a whole new meaning to the phrase “giving blood”.

Quotable moments: George: “I’ve done it. I’ve put the wolf to sleep. I don’t know what to do first.”
Mitchell: “Maybe have a shower.” Narin Bahar