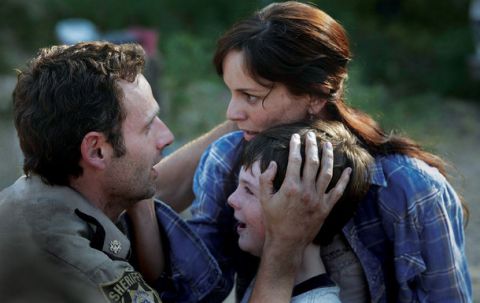 THE ONE WHERE
Rick heads back to the camp and is reunited with his family, but then decides to go back into Atlanta and free Merle from his handcuffs. Oh, he's so damned noble.

VERDICT
This is, essentially, the episode that lays out the basic dynamics of the group, and as such it works pretty well. After the first two instalments it’s comparatively low-key, but there’s nothing wrong with that. It can’t be headshots-a-go-go every week, and there are some neat character moments here, like the conversation between four of the women of the group in which they discuss how much they miss little home comforts like coffee makers and, er, vibrators…

The continuing enigma that is Shane continues to fascinate. Straight away, I decided the guy was a smug asshole. Then he turns out to be good with kids. Then he leaps to the defence of a battered wife. But then he gives Ed, said wife-beater, a face-pounding of such unnecessarily prolonged intensity that it’s crystal clear he’s taking out his own frustrations on the guy… and I’m back to square one.

BEST BIT
The heartstring-yanking moment when Rick and his son Carl clock one another. Gulp.

BEST PERFORMANCE
Merle’s babbling in the opening teaser: believably brain-fried and desperate. What a fantastic actor Michael Rooker is!

REFERENCES
Daryl tells Dale to “take that stupid hat and go back to On Golden Pond ”, a nod to the 1981 film in which Henry Fonda’s character wore a similar titfer . Nice gag, but one that’s surprisingly cine-literate for a hick like Daryl. Mind you, it did win a bunch of Oscars, so it’s not exactly an obscure reference.

WE SAW THAT COMING…
Merle cutting his hand off to get free. Come on, didn’t you? Guessed it the moment a bunch of tools dropped to the floor* in episode two. Maybe it’s not so eminently guessable if you’ve never seen Saw …

BEST LINE
Lori: “I would rather eat Miss Piggy!”

* Image source: someone on the http://pinoyexchange.com forum. Sorry, having trouble working out exactly who!