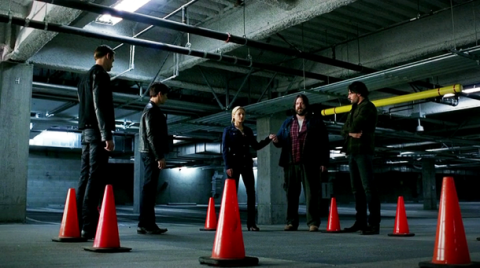 THE ONE WHERE Bill, Eric and Sookie track down Russell Edgington, Terry meets a fire monster, Tara and Jessica bond then unbond, Sam is shot and Lafayette has some bother with a disembodied head.

VERDICT True Blood is becoming a hard to show love, while still boasting moments that are hard not to love. There are times when it can still deliver some cracking drama, or deliciously perverse horror, or brilliantly bonkers twists. It can still surprise you with some utterly random editing or a weird way of staging a scene. It can still, crucially, make you care about characters. But it’s rapidly becoming less than the sum of its parts, as the plethora of parallel plot lines struggle to maintain a consistency of interest. Whereas in early seasons the storylines would interweave cleverly and interdependently to create a show with a unified feel, now the show feels like it has a multiple personality disorder. You kinda hope there is some link between Terry fiery Ifrit demon and Sam’s shifter shooters, but there’s also the nagging worry that either or both plotlines might simply end up as pointless as the demon baby from last season; seemingly created merely to give certain characters something to do.

But while there is a listlessness and lack of energy to the overall plot arcs of season five so far, “Let’s Boot And Rally”, delivers some vintage True Blood moments. Over the course of five years, familiarity with the esoteric way the show tells its stories has lessened its ability to shock and surprise to some extent, but here we’re given some wonderfully quirky moments, of the kind that have been largely missing of late. If nothing else, you’re not going to forget Lafayette’s mum chatting with a disembodied head in a hurry.

Then there’s Eric, Bill and Alcide’s argument that descends into the baying of dogs (in Sookie’s mind at least); Jason in Masters Of The Universe romper suit; Eller explaining how he learnt about the Ifrit by Googling for it; the Wonderfalls moment when Lafayette's religious figures come to life; a bunch of "supes" killers in Obama masks; and the Vampire Authority’s science boffin calmly calling Bill and Eric up to tell them she’ll be killing them by remote control in the morning: “It’s been rad serving you!”

Sookie has another personality change this week. Sadly, after everyone having a go at her last week, Alcide let the side down by letting the Stackhouse siren get her hook in him. This seems to have cheered her up no end (despite the vomiting) and when Eric and Bill come to ask for her help locating Edgington, she responds by lasing into resigned delirium. She’s actually quite fun in this mode, but blimey, the many moods of Little Miss Sookie can become a little wearing. She’s becoming increasingly more difficult to empathise with.

Tara, on the other hand, has never been better, and not just because she’s wearing Pam’s “exquisite” hand-me-down basques. Her girly scenes with Jessica are very sweet and among the episode’s highlights, but you just know their newfound friendship isn’t going to last. And it doesn’t. By episode’s end, in a beautifully staged montage scene that’s an exercise in economical storytelling, the girls are at each other’s throats. Oddly, it’s all over a guy who’s decided to reinvent himself as an extra from a Hall And Oates video (I hope we’re supposed to be wincing at Hoyt’s makeover…)

There’s not a lot that’s truly bad with the episode, apart from the puppy (see below), the guest appearance from Lost ’s smoke monster (using the same software, it would seem, from 2004), the really unconvincing fang wounds on Jason’s parents and the oddly-staged cliffhanger. The main problem is that just when it’s getting really good, it’ll suddenly jump to Terry, or Sam, or Jason, and, for the moment at least, their plots aren’t particularly gripping. And one of them involves fairies. Even the Authority only turn up to remind you they're major players this season, and don’t actually do much of interest

HE’S BACK John (Dr Phlox) Billingsley is back for the first time since season three, episode three, as coroner Mike Spencer.

PROFESSIONALISM PLEASE How long was Tara a barmaid at Merlotte’s? She doesn’t seem to have learned much. At Fangtasia Jessica orders, “True Blood, two parts O-neg, one part b-pos,” but whatever Tara gives her, it’s in equal parts. Then again, Tara was hardly in the mood for professionalism, after realising that she was basically Pam’s slave now. You have to wonder if her gripes about, “Nothing ever changes,” was referring to the fact that she was still working in a bar, or something deeper about the position of black people in American culture.

AAARRRGGGHHH! That bloody were-puppy is back! At least it’s in long shot this time.

BEST LINE
Sookie: “Alcide, are we gonna talk about the fact I puked on your shoes?”
Alcide: “Nope.”