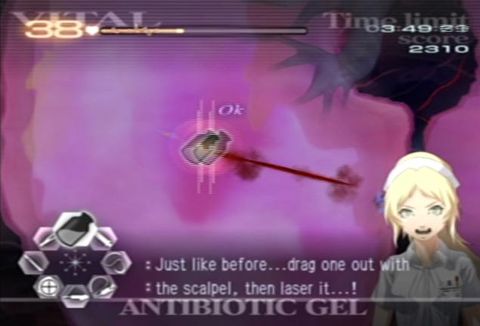 Speaking of that first version, do players of the DS original actually need a Second Opinion? Besides the enhanced gear and a few tweaked missions and procedures, you're looking at updated graphics, redrawn character portraits and (mercifully) three levels of difficulty, which you can swap between at the start of any operation.

But the biggest addition to the Wii version has to be a second playable character: Nozomi Weaver, a buxom, gray-haired-yet-29-year-old Japanese babe with the Healing Touch and a dark secret. She has only a handful of missions, unlocked one at a time as you progress through the main story, but they're creative highlights - performing surgery by penlight or twisting the Wii wand to puzzle-piece the broken fragments of a shattered arm back together. Nozomi's story also fills in some of the details behind the origin and spread of GUILT.

What's GUILT, you ask? The answer to that perfectly reasonable question brings us to the game's final strength: an intriguing, charismaticallyfar-fetched story, told via still character portraits, subtitles, and almost zero cheesy voice acting. Things start off normal, but by the end of the second episode, when you treat a young girl whose lungs are being shredded from the inside out, it dives headfirst into Lake Bizzaro.

GUILT, it turns out, is a mysterious virus that can take on any number of forms, each more deadly and puzzle-like than the last. You might find yourself laser blasting living, tumor-causing yin-yang symbols, pumping color-coded serums intoviral crittersliterally doing the backstroke through a lung, or racing to dismantle organic armor plates before they multiply and suffocate a host's organs.