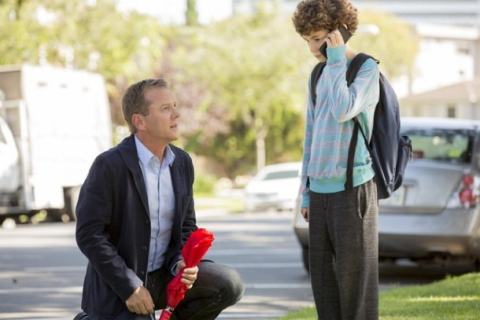 THE ONE WHERE Martin infiltrates Aster Corp to retrieve Calvin’s files, and discovers that Calvin is the one who has Amelia. Jake starts school and Avram (the Jewish guy in New York) has an encounter with assassin Ortiz... but lives. Phew.

VERDICT Lots going on this week, and some of it very interesting indeed – particularly the face-off between Avram and Ortiz in New York, which ramps up the tension very effectively. It's lovely to see Avram again as he was such a big part of season one, and it's brilliant that he sees through Ortiz in seconds after meeting him, telling his friend “He's an enemy of the 36!” with no proof other than his own gut feeling. Go Avram!

I also love the fact that he knows Ortiz won't kill him because he isn't one of the 36 and that's not what God would want Ortiz to do... although that's one heck of a gamble. There must have been mopped foreheads all round after that encounter.

Elsewhere, the sub-plot about Jake cleaning out a rabbit hutch is hardly thrilling, but it's sweet enough (and also provides a chuckle, as Soleil complains about the fact that the school's bunny is called Cujo). Lucy teaming up with Trevor at Breakwire is a welcome development as they have good chemistry together (no, not in that way), although when she goes to the police to report Amelia's kidnapping it comes as no surprise that they think she's cray-cray. And frankly, she should have seen that coming, too.

Finally, Amelia being hooked up to a computer to play a pinball game – predicting the outcome each time – is all kinds of creepy, and hints at some kind of HAL 9000 on the way from Norburg. Brrrr.

DID YOU SPOT? This chart of chores for the schoolkids features the name “Nelson” – which happens to be the first name of this week's director. Also, poor Jessica must have really pissed off her teacher, as she has to clean out the bunny twice in a row.

BEAUTIFUL DREAMERS We get a snapshot of the other murder victims on Ortiz's kill-list as we see news reports detailing unsolved killings – are they all his? Aside from the people we already know about (astronomer, composer, architect), other dead geniuses include a Poet Laureate, a mathematics star, a graffiti artist and a chess maestro.

GETTING THE NEEDLE This is something that isn't merely confined to Touch , but here's as good a place as any to whinge about it. See that needle? See that arm? You see how the actor has placed the needle at a 90-degree angle to the arm? That's not how you inject fluid into someone's vein, you pillock! Needles go into a vein parallel(ish) to the arm. You've basically just stuck that needle through her muscles and done a bucketload of damage. Please, actors, stop doing this. The next time you go to the doctor's for a shot, just watch what they do, okay?

NUMBERS GAME This week's number is 5991, which is used as the final sequence of an algorithm to decode Calvin's files and is Ortiz's hotel room number.

MASTER PENMANSHIP Hasn't Amelia got amazingly neat handwriting? Incidentally, two weeks ago I mentioned how a European character placed a line through the number seven, and then noticed (but didn't mention) that Amelia did it the following week as well. In this shot, however, her ones are written European style but her sevens aren't. And yes, I am a big, fat nerd for even spotting this.

AH, L'AMOUR... Jake's friend Soleil tells him, “You're cool, you know that? You smile at me a lot, and you're a really good listener.” My first thought was, “Get your coat, Jake, you've pulled.” And sure enough, at the end of the episode Soleil announces that she and Jake are dating. She moves fast!

HIS NAME'S BAUER... JACK BAUER After more than a year of playing doting dad Martin on Touch , it's getting harder and harder to see Kiefer Sutherland as his former character of Jack Bauer from 24 . But every now and then there's a glimmer of our favourite CTU agent – such as when he tells Calvin: “You'd shoot better if you kept your elbows in tight.” A few minutes later he has him slammed against a wall with a gun to his throat, too. Old habits die hard.

WE MISS YOU! Four episodes into season two and the giggly Japanese girls who popped up all the way through season one have yet to make an appearance. Fingers crossed they're starring in their own spin-off in a parallel dimension or something...

BEST “AWWWW!” MOMENT #1 Jake laughs – twice – at something Avram says to him on the phone. After so long spent scowling, it's lovely to see David Mazouz smile, and Martin's reaction is priceless.

BEST “AWWWW!” MOMENT #2 Soleil watches in amazement as Jake's schoolmates cluster around him and congratulate him for finding their pet rabbit – and he doesn't flinch as they pat him on the back. Jake can be touched now!

FUTURE SHOCKS Touch 's ratings this year so far are nowhere near as high as they were in season one, in which it averaged 7.2 million viewers. This latest episode only netted 2.51 million. Have the show's changes driven people away, or is this just natural wastage and now only the loyal viewers remain? Hopefully they won't drop any more...