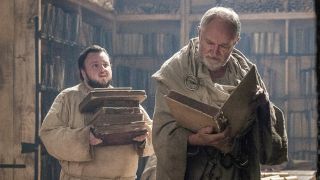 THIS ARTICLE IS DARK AND FULL OF SPOILERS FOR SEASON 7. YOU HAVE BEEN WARNED.

Knowledge is power. Especially in Westeros, where the political turmoil is reaching breaking point and everyone is looking for the next ace card. Cersei’s allying with the Greyjoys. Daenerys has three dragons, the Unsullied, the Dothraki, and Tyrion (if knowledge is a weapon, he’s pretty much a nuclear bomb). Jon and Sansa have the Wildlings, Littlefinger, and a retinue of families supporting their claim to the Throne in the North. But there’s one player that’s so careful, so discreet, that no-one has even considered them as a threat: The Maesters.

Sam is busy doing some illicit research in Oldtown to find a store of dragonglass for Jon to use against the White Walkers. It’s obvious that he really shouldn’t be rifling through the restricted section if he has to steal the keys to get there in the first place and sneak in at the dead of night, but he could be in far more danger than he realises. There’s a reason the Maesters ignore his stories of the undead threat - and it plays into a massive conspiracy. Pointing out right here that this is all fan theories and conjecture based on jdylopa’s excellent post on Reddit, so it’s up to you whether any of this counts as spoilers!

What is the Maester conspiracy?

In short, it’s a fan theory that the Maesters want to eliminate all magic from the world so reason can rule, therefore giving them more sway in world events. Because if magic were to die out, people would have to turn to knowledge to answer all their burning questions. No more resurrections from R’hllor, no more Faceless Men, and no more warlocks or maegi (lesser magic wielders, like Cersei’s dreaded Maggy the Frog). All of which give the learned men of Oldtown a distinct political advantage. Think of the power they’d have if all magic were to disappear. They’d be the ultimate authority on all matters.

If that sounds a bit far-fetched to you, just take a look at the books for some solid evidence that the Maesters are more conniving than they appear. In A Feast for Crows Sam is talking to Archmaester Marwyn, who specialises in the occult and the study of magic - and is thought by other Maesters to be mad because of it. When they start to talk about Maester Aemon (a Targaryen who relinquished his family name to study and eventually ended up on the Wall) things start to get interesting.

Archmaester Marwyn shrugged. "Perhaps it's good that he died before he got to Oldtown. Elsewise, the [archmaesters] might have had to kill him, and that would have made the poor old dears wring their wrinkled hands." "Kill him?" Sam said, shocked. "Why?" "If I tell you, they may need to kill you too." Marwyn smiled a ghastly smile, the juice of the sourleaf running red between his teeth. "Who do you think killed all the dragons the last time around? Gallant dragonslayers armed with swords?" He spat. "The world of the Citadel is building has no place in it for sorcery or prophecy or glass candles, much less for dragons. Ask yourself why Aemon Targaryen was allowed to waste his life upon the Wall, when by rights, he should have been raised to archmaester. His blood was why. He could not be trusted. No more than I can."

A little while later, he advises Sam to "say nothing of prophecies or dragons, unless you fancy poison in your porridge”. The message is clear: magic is not welcome in Oldtown. Neither is Archmaester Marwyn. Billed as being “unsound” by the Maesters, he believes in magic and spent “eight years to the east mapping distant lands searching for lost books, and studying with warlocks and shadowbinders”. He’s not the right person to take part in their conspiracy because he disagrees with the idea that magic has no place in the world. Plus, he plainly says “Who do you think killed all the dragons the last time around?”. According to him, the Maesters had something to do with it. We’re not sure whether he’s talking about the Doom of Valyria or the death of the dragons that accompanied Aegon the Conquerer to Westeros, but he is more blunt about Maester Aemon. “Ask yourself why Aemon Targaryen was allowed to waste his life upon the Wall, when by rights, he should have been raised to archmaester. His blood was why”. Maesters do not like the Targaryens. Which means Daenerys needs to watch her step in season 7...

What this means for the TV series

Keep an eye on Sam and how he fares in Oldtown. Snooping around the restricted section and reading books that speak of White Walkers and dragons is sure to get him noticed. If it hasn’t already, that is. Mind you, if some fan theories are correct Sam is a major character in the biggest way possible - he could be the one documenting all the events of Game of Thrones. The first episode of season 7 hinted that Sam could be lined up to finish Archmaester Ebrose’s ‘The Chronicles of the Wars Following the Death of King Robert I’ -  and rename it something more poetic. Like ‘A Song of Ice and Fire’, for example. So, if he is that important, it’s unlikely that he’ll get murdered. Plus having him aid Jon in fighting (and hopefully wiping out) the White Walkers could be something the Maesters can get on board with. After all, that would be an entire other magical race annihilated from Westeros. With those icy foes gone, what’s left? Dragons.

The Warlocks of Qarth were the first to make the link between the reappearance of dragons in the world and their magic growing stronger. So as well as being innately magical creatures, dragons act as a bonus boost to any magic users they come near. This could mean Melisandre is about to become a lot more formidable than before, but that’s only if the Maesters don’t get to Daenerys’ dragons quickly. From their point of view it could be wisest to ally with a House who wants to get rid of the Targaryens - and therefore the winged reptiles - from a political point of view. Like the Lannisters, for example. Qyburn has already used his smarts to help out Cersei in creating a weapon to take down the dragons - but he’s been disowned by Oldtown for illegal human experiments. However, he could still be privy to the grand conspiracy. If he is, killing the dragons would be high on the agenda for more than one reason. Making Daenerys more vulnerable, the lack of Drogon, Viserion, or Rhaegal would leave her more likely to be caught - which, let’s face it, would mean certain death at Cersei’s hands and the extinction of the pure Targaryen line.

There’s still the potential for the Maester conspiracy to factor into seasons 7 or 8 of Game of Thrones, so don’t sign it off just yet. And keep your fingers crossed for Sam. Let’s hope he keeps his mouth shut about White Walkers until he’s back at Jon’s side.