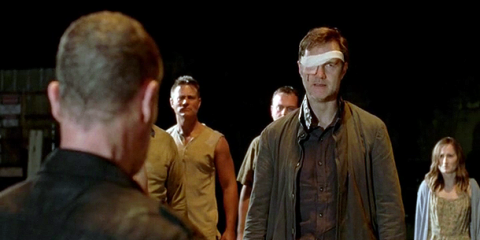 THE ONE WHERE Rick’s gang rescue Daryl, but the Governor is left standing. Both sides regroup and plan their next move, but an unexpected visitor throws everything into chaos.

VERDICT So far, The Walking Dead 's third season has been relentlessly paced and furiously exciting. But if you come to “The Suicide King” expecting more gun-play and zombie carnage, you may be a little disappointed. After the initial skirmish, as Rick's team storm Woodbury and snatch away Daryl and Merle, the episode switches gear, slowing down considerably.

It’s far from dull: this is clearly the calm before a very bloody storm, as the two opposing forces reassess the situation. And rather like the way Game Of Thrones presents you with every side of a conflict, it’s becoming easy to see the Woodbury lot’s point of view. To them, Rick’s team are marauding pirates, swooping in and killing their friends. You almost feel sorry for them. Almost, but not quite – they’re still, broadly speaking, a faceless lot. It would be good to get to know them better before they inevitably die horribly.

Not so the Governor, of course. He’s now wandering through Woodbury with the thousand-yard (and one-eyed) stare of a truly broken man. He was already bad, but now the Governor has become truly insane. He's surprisingly candid with Andrea about her friends (and yet still she sticks by him – Andrea is an idiot), casually shoots a guy in the head in public, and is clearly not going to rest until all of Rick's group are all dead. Perfect: that's the Governor that fans of the comic wanted to see, and now we've got him.

Rick is also acting up. Refusing to take Merle in was probably a good call given his history, but it comes at the cost of losing Daryl – a big mistake, given how outnumbered they are. It’s a good thing they’ve got Michonne and Tyreese's gang on hand to help, you might be thinking... only Rick pushes them away too. Smart, Rick. Real smart...

There's a reason, of course. Like the Governor, Rick is finally cracking up. He was already hearing voices, and now he’s seeing Lori's ‘ghost’. That the show has become a drama about the battle between two mad men is an electrifying development. The question now isn't which side will win (that’s been obvious from the start, right?) it's who will be left standing on either side when Rick and Phil have finished with each other.

I had a few quibbles with other aspects of the episode. Michonne got short shrift, and while Chad Coleman is an instantly likeable, down-to-Earth Tyreese, Allen may as well have “expendable” tattooed on his forehead. His attempts to look innocent after discussing plans to conquer the prison were comically inept. There's also the slight sense that Merle and Daryl's self-imposed exile is merely marking time until they're needed again. They’re bound to end up back at the prison eventually.

Still, it was a strong opening installment for the second half of the season, that had the confidence to take its time and establish an atmosphere of overbearing dread. As Rick says at one point, “we started something last night”. The Governor is sure to respond, and I can’t wait to see him bring the pain…

THE NEW GROUP We see considerably more of Tyreese and his fellow survivors this episode. They are Allen, Ben and Sasha – Tyreese’s sister. Both Allen and Ben appeared in the comic (as did poor dead Donna), but Sasha is an entirely new character.

ICK! Glenn takes out his frustration on a zombie by stomping repeatedly on its head, grinding it to a grizzly pink mush. Don’t look at him like that – he’s had a bad day.

BEST LINE:
Tyreese: “I must be the first brother in history to break into prison.”

Read all our The Walking Dead season 3 reviews

The Walking Dead airs in the UK on Fox on Friday nights at 10pm.