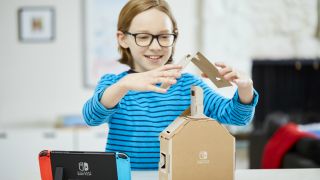 Nintendo Labo has been getting a lot of love online, even from unlikely places like The UPS Store. Earlier this week, a tweet went viral when the company showed a video of a cardboard carrying case it had designed for all your Labo toys. Now The UPS Store might make it for real.

#NintendoLabo inspired us to be more creative with cardboard. And since we’re such experts at packing things in boxes, well... pic.twitter.com/OM1BFo8UuTApril 26, 2018

"Given the positive feedback and number of requests we received, we are playing with the idea, however no final decision has been made yet," Tracy Spahr from The UPS Store told us.

She also revealed that the prototype itself took a team of six people over 12 hours to design and assemble, and the carry case is made entirely out of seven The UPS Store boxes.

"The creative team at EP+Co - The UPS Store social media advertising agency - developed the blueprint, then had the entire piece laser cut," Spahr explains. "The Toy-Con-Tainer has custom-built spaces for the 5 Labo Toy-Con individual pieces. We also included some extra features, including the secret hatch, lock and key, handle, and moveable wheels to take it on the go."

It doesn't always work when brands try to play nice on social media, but this particular romance has created something pretty special. According to Spahr, it all comes down to a respect for creativity, and cardboard.

"When the Labo was released last week, we noticed there wasn’t a place to store all the Toy Cons. Creating the Labo Toy-Con-Tainer allowed us to pay tribute to a fun brand with the thread that binds us to them being cardboard; in addition, we were able to demonstrate our packing expertise in a fun way."

If you want to see the Toy-Con-Tainer become a real thing, let The UPS Store know.

Here are the best Nintendo Labo deals, to help you get the sweet cardboard for less.