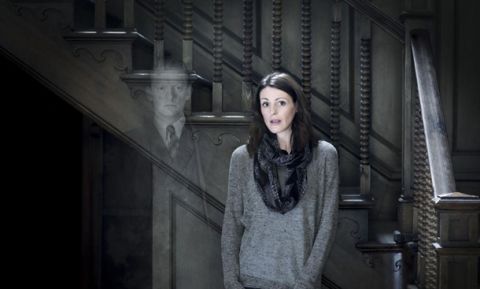 THE ONE WHERE In the wake of their son’s disappearance, the Caleigh family move into Crickley Hall, a property Gabe has been hired to renovate. Meanwhile, in 1943, Nancy Linnet accepts a job at Crickley Hall, as a teacher for the orphans housed there and almost immediately runs into trouble with the Cribben siblings, the owners of the home…

VERDICT The Secret of Crickley Hall impresses from very nearly the first time anyone opens their mouths. In the present, Suranne Jones and Tom Ellis do the near impossible and make you care for Eve and Gabe within minutes of meeting them. Their sleepy, very funny, breakfast routine has the look of something that’s been done a thousand times before and you feel like you know this couple, or at least know people like them. It makes what follows all the more horrifying, and Jones in particular sells the empty-eyed, dead-inside limbo halfway between denial and grief effortlessly.

Eve is an open wound, and one of the most affecting moments comes early on when she screams at an empty street on finding a Missing Cat poster stuck over the poster of her missing son. The Caleighs are a family in hell long before they move to Crickley Hall, and Jones and Ellis show you the grieving process without ever seeming crass or visibly “acting”. Their reactions feel real, nuanced and at times, heart-breaking.

Meanwhile, back in the past, Olivia Cooke brings instant authority to her role as Nancy, which is vital given she’s sharing screen time with Douglas Henshall at his most terrifying and the always excellent Sarah Smart as his sister. Nancy’s gradual discovery of the horrors at Crickley Hall makes for the episode’s best scenes, and you can see the terror and anger warring for control of her without Cooke saying a word. It’s an astounding performance, even though Nancy does give every impression of being epically doomed by series’ end.

Special mention has to be made of Douglas Henshall as Augustus Cribben, the head of the orphanage and a man crippled by a tremendous sensitivity to noise. Those of you expecting a Nick Cutter do-over will be both disappointed and amazed at Henshall’s excellent 1940s upper-class pronunciation, clenched teeth and ever-on-the-verge-of-breaking-down civility. He exudes menace just by being on screen and the moments which are just him, sitting, silently in the dark by the house well are some of the most chilling.

The less subtle scares are equally effective, with the sudden appearance of David Warner’s aged groundskeeper and a chilling moment with a cane being the real standouts. The air of menace is palpable and there’s some lovely, understated, “The villagers know the truth” dialogue which will make you smile and chill you in equal measure. I particularly liked the revelation that the area is called Devil’s Cleave, which would be more than enough to get me throwing my things in the car and heading anywhere but there. The cast is uniformly great, the setting is suitably menacing and there are some genuinely surprising turns in this first episode as well as some great scares. The series is off to a flying start. Just hopefully not a noisy one, after all, we don’t want to disturb Mr Cribben do we?

CREEPIEST MOMENT A toss up between the sudden appearance of the cane (Twice!) and the moment where Gabe noticed the plaque about the flooding in the local church, then notices how many people died in it…

UNANSWERED QUESTIONS Why did Percy take Clyde the dog? Why did the Reverend threaten Percy? What’s the nature of Eve’s connection to her son? Is he alive? Did he know something was going to happen? (That “I love you, Mummy” at the top of the swing had a very brave, resigned air to it.) How was Augustus injured? What caused the flood? Who or what caused the flood? Who’s wet footprints keep appearing?

ISN’T HE OR SHE FROM? Yes, they all are. This is a cast of positively Kevin Baconian dimensions, so, deep breath and from the top;

• Suranne Jones played Idris in “The Doctor’s Wife” of course, and is also best known for Scott And Bailey and driving round a roundabout lots in that Maltesers advert.

• Tom Ellis was Tom Milligan, Martha Jones’ amazing vanishing love interest in Doctor Who as well as King Cenred in Merlin , Mark in The Fades and of course, Gary Preston, Miranda’s boyfriend(ish) in Miranda .

• Maisie Williams is, of course, the brilliant Arya Stark in Game Of Thrones and also appeared in a Funny Or Die skit called Olympic Ticket Scalper with Sir Patrick Stewart, Simon Pegg and Ryan Lochte.

• Iain De Caestecker was of course, Paul in The Fades , (a moment of silence, please) and also has just been cast as Agent Leo Fitz in the SHIELD TV show.

• Douglas Henshall is of course known for playing Nick Cutter (Another moment, please) in Primeval .

• Sarah Smart played Jennifer in “The New Flesh” and “The Almost People” last season on Doctor Who .

BEHIND THE CAMERA Adapter/director Joe Ahearne was the creator of the brilliant Channel 4 vampire series Ultraviolet and the BBC’s criminally under-appreciated exorcism drama Apparitions , as well as having been the director of five episodes during the Christopher Eccelston series of Doctor Who (“Dalek”, “Father’s Day”, “Boom Town”, “Bad Wolf” and “The Parting Of The Ways”).

BEST LINES
Gabe: “Just wing it.”
Eve: “I never see you wing it.”
Gabe: “Well it’s difficult with structural engineering. No one dies if you skim a bit.”

Gabe: “You must have seen people come and go.”
Percy: “One or two.”

The Secret of Crickley Hall is on BBC1 on Sunday nights at 10pm.