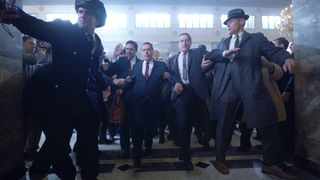 The trailer for Martin Scorsese's new movie, The Irishman, has landed, showcasing the forthcoming collaboration between the director and Netflix. The movie stars an incredible ensemble of actors, many of whom have worked with Scorsese before. They include Robert De Niro, Al Pacino, Joe Pesci, Harvey Keitel, Ray Romano, Bobby Cannavale, Anna Paquin, and Stephen Graham to name a few. Watch the teaser below.

The Irishman takes place post-Second World War and centres on veteran Frank Sheeran (De Niro), a hustler and hitman who worked alongside some of the most notorious figures of the 20th century. The official synopses says the movie will chronicle "one of the greatest unsolved mysteries in American history, the disappearance of legendary union boss Jimmy Hoffa, and offers a monumental journey through the hidden corridors of organised crime: its inner workings, rivalries and connections to mainstream politics."

The Irishman will premiere at the New York Film Festival on September 27, 2019. It will have a limited cinema release before debuting on Netflix at an as-yet unknown later date.