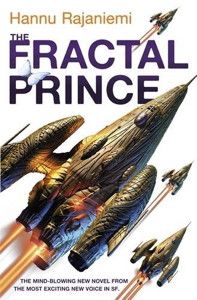 This time, le Flambeur’s task is to break into a Schrödinger box that may or may not allow him to claim his freedom. Cue a multilayered tale played out in part on Earth and in part on virtual realities where nothing is as it initially seems. Or possibly it is, but also isn’t, at least until we discover whether the cat is definitively alive or dead. Boom, boom.

If that sounds flippant, it’s more a case of The Fractal Prince defying efforts to describe it. Which isn’t to say it’s without antecedents in recent SF. The more outré work of Ian McDonald and Ken MacLeod springs to mind. As, specifically for the way Rajaniemi weaves together narratives that initially seem to belong in different books, does Jon Courtenay Grimwood’s stylistically linked trio of novels from the mid-noughties, Stamping Butterflies , 9tail Fox and End Of The World Blues .

However, where Grimwood uses cyberpunk tropes to keep readers partly on familiar ground, Rajaniemi’s prose is far more exotic, delivered with self-conscious geek-hipster wit yet infused with the arcane terminology of quantum physics. Imagine M John Harrison lampooning a Greg Egan novel and you actually won’t be so far wrong.

And yet, for all its knottiness – and this is a novel I frequently read just 10 pages at a time because I found it so confusing, and even then I’m really still not sure I understood the plot(s) – The Fractal Prince ’s great virtue arguably lies in its very strangeness, the way it amplifies the weirdness of The Quantum Thief .

So yes, a difficult sophomore novel and, at a guess, one that cost its author sweat and tears, but also one that quite possibly needs to be wrestled with if you’re at all interested in literary SF.

Read an interview with author Hannu Rejaniemi about writing this book . Plus there are more of our book reviews here .